The Adventures of Sir Lancelot

The last Arthurian film I looked at was a bit of a washout, and I wasn’t expecting anything much better from The Adventures of Sir Lancelot, a British TV show from 1956. But to my surprise, it turns out to be rather good! It shows fairly regularly on Talking Pictures TV I believe, but the first ten episodes (of a total thirty) are easily found on YouTube. 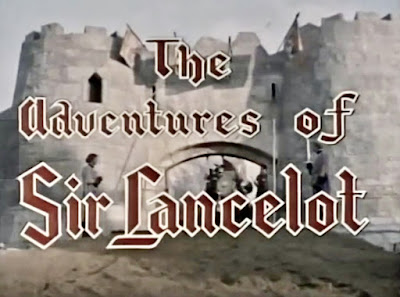 It was made at Nettlefold Studios, Walton-on-Thames, by the same production company responsible for that Robin Hood series with the annoying theme song (‘Rubb’n Hood, Rubb’n Hood, ridin’ through the glen’ etc. Sir Lancelot has its own annoying theme song in the same style (‘In days of o-old, When knights were bo-old…’) but it doesn’t come in until the end credits of each episode, so that’s all right.) It apparently re-uses some sets and costumes from Robin Hood too. It’s very much in that classic Hollywood-Merrie England style I’ve talked about before, but it’s probably the best example of it I’ve watched so far for these blogs: it’s certainly a lot livelier than Knights of the Round Table. 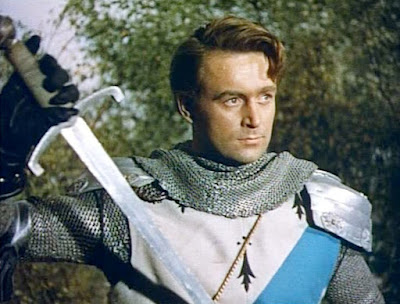 It kicks off with Sir Lancelot (William Russell, later to be one of Doctor Who’s first sidekicks) arriving at Camelot to join the fellowship of the Round Table. He’s brave, keen, and sports a very stylish quiff, but he meets with some resistance at first, as he’s fresh from a battle where he was fighting against King Arthur and co. After winning a duel with Gawain, he’s accepted.

This burying of old enmities is a recurring theme in the show, which portrays the Round Table as a sort of police force of decent chaps who spend much of their time sorting out pointless wars and disputes between their neighbours. It’s all a bit silly, but well-meaning and really very charming. 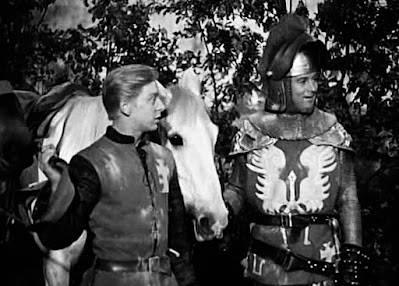 Lancelot soon acquires a sidekick of his own, the kitchen lad Brian, (played by Robert Scroggins, and no one has ever looked more like a Scroggins). Together they end a quarrel between two blustering noblemen (one of whom is Ballard Berkeley, the Colonel from Fawlty Towers). The fourth episode turns unexpectedly into a boarding school story as Brian is sent to train with the other squires at Camelot and gets bullied by his snobbish classmates for being a commoner, like a scholarship boy at Greyfriars. There is a lot more sneaking out of the the dorm after lights out than you’d generally expect in a mediaeval castle, unless the mediaeval castle is Hogwarts.

It’s not a show that relies on formula, at least not in the eleven episodes I’ve seen — sometimes it leans towards comedy, sometimes high adventure, sometimes social commentary - but the stories are generally well-crafted and always pack a lot of incident into their 30 minutes. A few seem to reference elements from the legends and romances (Episode Three gestures vaguely at Chrétien’s The Knight of the Cart, for instance), but mostly they’re just made up, I think. Some of them have a flavour of the original stories, while others feel more like Westerns, the genre Arthurian film and TV always tries to turn into if it’s not kept on a tight rein. In one episode, Lancelot disguises himself as the aged Sir Bliant in order to teach Bliant’s unruly sons a lesson. In another the kingdom is menaced by Irish pirates who arrive in a dinky little longship. The Thieves, from later in the series, is like an Arthurian Sullivan’s Travels: Lancelot, clearly a reader of Ye Guardian, tells Arthur that poor men become thieves out of desperation. Arthur, a Dailie Telegraph man through and through, claims it’s because they’re lazy or wicked; to settle it, they disguise themselves as branded thieves and set off into the world, where various misadventures befall them and Lancelot is proved right.

Episode 10, Roman Wall, has Lancelot and Brian meeting a surviving outpost of the Roman Empire who live in secret on a fortified headland, with gladiators and togas everything: the kidnapped British princess whom Lancelot has come to rescue is very reluctant to leave the hot baths behind. That’s the sort of absurdity that keeps on getting thrown up in modern Arthurian retellings, where plate-armoured knights with fancy French names ride out of their 14th Century castles to encounter vikings, Romans, and Picts. But although they cheerfully embrace all that, the writers of Sir Lancelot seem to have decided that including actual magic would be a step too far. Merlin (played by Cyril Smith as a sort of Leonardo da Vinci with Spike Milligan overtones) uses science and conjuring tricks to convince Arthur and the others that he’s a real magician. He even has a handy hermit stationed on the road to Camelot who flashes heliograph messages to him about new arrivals so that he’s able to foretell their coming. He’s very funny, and I genuinely think he’s one of the best screen Merlins. Lancelot, who is of course smart as well as brave, is the only one who sees through his sleight of hand. 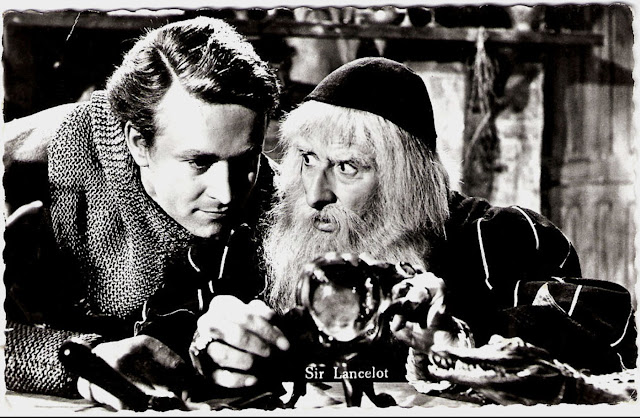 Arthur, meanwhile, is portrayed very much as the good, wise king of the legends, perhaps a little inclined to pomposity. He’s played in the first three episodes by Bruce Seton, then Ronald Leigh-Hunt takes over - I’m not sure what happened there, but they’re both good, and Leigh-Hunt gives him enough energy in his occasional fight scenes to suggest that he’s a warrior as well as a ruler. William Russell does a good job of making Lancelot light hearted and charismatic, which is no mean feat - he’s such a goody-goody in Malory etc that I always found him very hard to warm to. Maybe he’s a bit too light hearted at first, as Russell has a strange habit of making funny faces in the fight scenes, but he cuts it out after a couple of episodes - I assume a different director took over and told him to dial it down.

Jane Hylton plays Queen Guinevere as a rather sweetly brittle upper class housewife; the sort of person you could imagine her being friends with Celia Johnson’s character from Brief Encounter. (Perhaps because it’s family viewing, the series seems to avoid any romance between her and Lancelot beyond a couple of appreciative glances in the first episode.) As usual the main focus is on the men as they gallop around being chivalrous, but most episodes find room for at least one good female role, and a lot of the women are plucky or funny or both, so it easily beats Arthur of the Britons on that front. 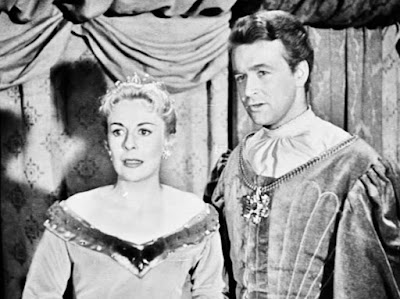 Being TV, the sets are small and the crowd scenes limited. The acting, make up, and fight choreography all feel very theatrical - David Morrell as the splendidly bumptious Sir Kay sports what I think is the most unconvincing crepe hair moustache I’ve ever seen on screen - but for the most part it’s theatrical in a good way: the actors ham it up marvellously, and the fights even manage to make the old sticking-a-sword-under-an-actor’s-armpit-to-make-it-look-like-he’s-been-run-through trick very effective. Sets and expensive shots get re-used from one episode to the next, as you’d expect, and so do actors. The great Nigel Green turns up as a villain in at least four of the episodes I saw, so waiting to see where he pops up next becomes one of the pleasures of the series.

Anyway, I was planning to watch an episode or two and I’ve very happily burned through all the ones I could find, and am now wondering where I can track down the rest. Bear in mind it’s a children’s show from sixty years ago and give it a try: it’s great fun.

Oh, and one intriguing #ArthurianFilms detail: in episode two, Lancelot is having a nap against a tree on his way home to Camelot, and wakes to find that someone has cooked him a nice pot of stew; it’s kitchen boy Brian, who has followed him in the hope of becoming his squire. And exactly the same scene crops up in Excalibur twenty five years later. It’s a rabbit instead of a stew, and Perceval instead of Brian, but the way it’s staged is too similar not to be deliberate, so I guess John Boorman must be an Adventures of Sir Lancelot fan too.