The Spaceman and King Arthur

Mark Twain’s book A Connecticut Yankee at the Court of King Arthur was published in 1889 and has been filmed several times - I’ll be looking at some of the other versions soon. This attempt, directed by Russ Mayberry, dates from 1979, and tries to bring the story bang up to date by making the hero an astronaut. When I went looking for it on the Disney channel I found it hiding out under an assumed name, like a snitch in the witness protection programme. It’s alternative title is Unidentified Flying Oddball, which is an absolutely terrible name for a film, and a completely inappropriate one for this film, but it does give the viewer some idea of what they can expect… 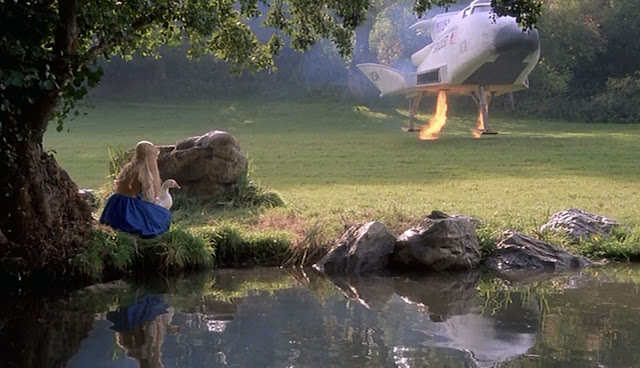 Our hero is a horribly chipper NASA robotics expert called Tom Trimble (Dennis Dugan). Accompanied by his android double (?) he’s piloting an experimental space shuttle-y thing that somehow ends up going back in time the way experimental space shuttle-y things do (??) and landing in Arthurian times. Then things develop along lines familiar to anyone who’s watched a few Doctor Who stories: our hero is mistaken for a monster, captured, imprisoned, but wins King Arthur’s favour by proving that the evil Sir Mordred is plotting to overthrow him. He then uses his 20th Century know-how and space agency gadgets to defeat the rebellion…

Its all played for laughs, but seldom for very big ones. There are a couple of promising bits of comic business - Tom has to fight a duel with Mordred, but has magnetised Mordred’s sword, so it collects a freight of candlesticks and gauntlets as the fight progresses - but it all feels a bit half-hearted. Veteran British actors Kenneth More and John le Mesurier do their best with thin material as King Arthur and Sir Gawain, but they both look awfully old and tired - I hope the money was good. Rodney Bewes from The Likely Lads is Mordred’s helpful squire. Jim Dale sports an ill-advised perm as Mordred and manages a few good moments of physical comedy, but the film never gives him the space to develop them. Ron Moody is Merlin, a wrong ‘un in this version of the story, and in league with Mordred. (His hair is the best thing in the film - one white tuft sprouting above each ear and a third curling up from the top of his bald head like a question mark.) Sheila White is the maiden Alisande who sees Tom’s spaceship landing and becomes his sidekick/love interest. Like everyone else, she initially assumes he’s a monster because of his spacesuit and helmet, although you’d think mediaeval people would instantly recognise an astronaut as a man in armour. When he flies in on a jet pack later, which you’d think would startle them, they seem to take it completely in their stride. I’m afraid the whole thing just hasn’t been very well imagined. 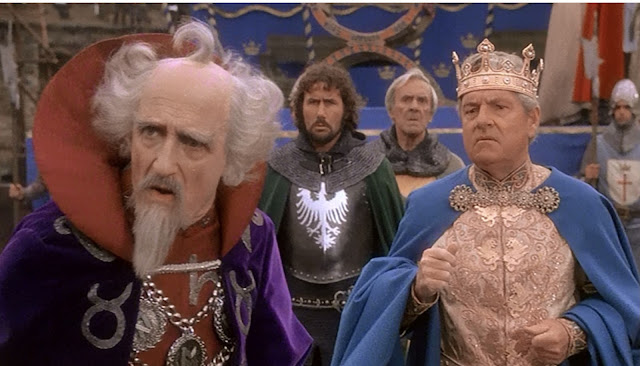 Fun is dimly visible at the edges of the story; it could work, it just needs tightening up a lot. For instance, there should be mileage to be had from the idea of Tom using science to solve each problem the Arthurian world throws at him, but the science in the film is so vague and hand-wavey it might as well be magic. The space shuttle-y thing has a magnetic field generator on each wing which all Mordred’s men-at-arms get stuck on in the final battle. (Why a space shuttle-y thing would have a magnetic field generator on each wing I can’t begin to imagine**, but at least it’s less morbid than Twain’s book, in which the hero sets up an electric fence and thousands of attacking knights are fried alive inside their armour.) There’s a sub plot about a goose which Alisande thinks is her dad, a minor character who does a bad Churchill impersonation for no reason at all, and a running gag involving a copy of Playboy magazine (or its fictional counterpart, Playmate or something) which I don’t think would fly in a children’s film today. Truly, the past is another country.

And that’s about it: it’s quite hard to find anything good to say about this one, the nadir of my Arthurian Films quest so far. All I can think of is that Alnwick Castle looks lovely as Camelot*. It’s populated by loads of extras, and lots of colourful stands and awnings dot the fields outside its walls for the jousting scenes. Those scenes, with their fluttering banners, caparisoned horses, and ladies in elaborate headgear, look very much like the vision of of the Middle Ages that I picked up from films and children’s history books when I was growing up: quaint, colourful, and full of historical detail, it’s a vision that echoes back through films like Camelot and Knights of the Round Table to the illustrations of NC Wyeth and Maxfield Parrish, the poems of Tennyson, and the paintings of the Pre-Raphaelites. By the time this film came out, it had already been superseded by the grittier, grimier, grislier mediaeval visions of Welles, Bergman, Polanski, and Pasolini. In 1979 I didn’t know who any of those directors were, but I knew the old image of Camelot wasn’t for me. I was drawn to the darker, earthier, Celtic twilit Arthurian world that I was beginning to glimpse in Brian Froud and Alan Lee paintings, and in The Boy Merlin. So perhaps this odd, rather depressing little film is where that older Arthurian tradition finally hit the buffers. Camelot would never look like this again. 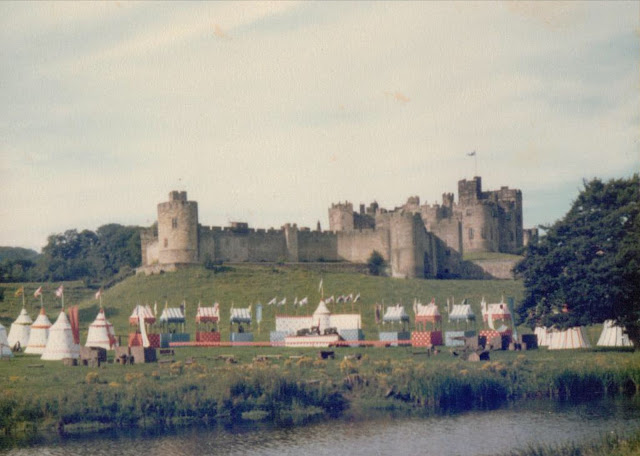 *Here’s a rather sweet blog by Sophie Neville, whose parents were present during the making of the movie and took the picture above.

** Apparently the magnetic field generators are an integral part of the ship’s experimental faster-than-light drive and it’s all explained in the opening sequence - thanks to Alex Weatherall on Twitter for setting me right on that.