This was probably the first King Arthur movie I ever saw. It’s the sort of thing that used to turn up on TV pretty regularly in the 1970s, and I think I have vague memories of watching but not really following it - though it’s so much of it’s time, and looks so like the illustrations in children’s history books or Look and Learn magazine that I may be misremembering. I recall it being very obviously shot in California, but in fact it was made in Ireland and England - Modred’s castle, where a climactic duel takes place, is at Hay Tor, a half hour walk from my house. The weather is unusually nice though - almost every outdoor scene takes place in blazing sunshine, under clear blue skies, so there’s none of the misty Celtic twilight that infuses later Arthurian films. 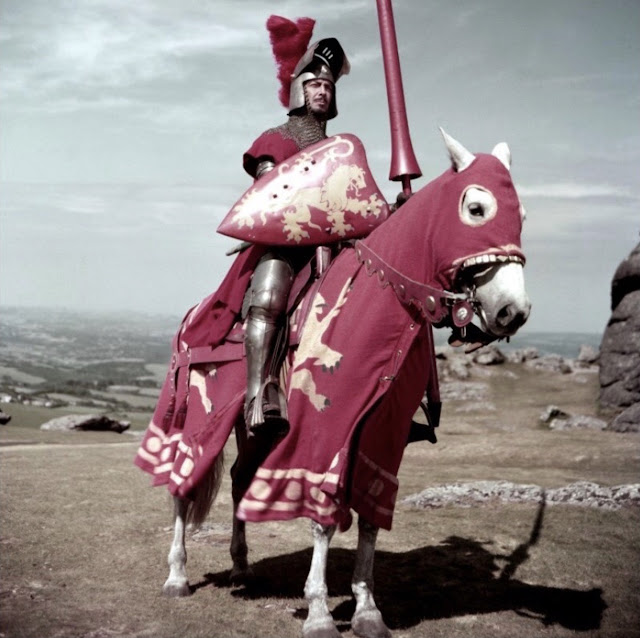 This is a version of Arthur which has been stripped of most of its usual magical elements. The sword Excalibur is revealed at the beginning, embedded in an anvil and hidden behind some ivy in front of a back-projection of the Cornish coast, and the Holy Grail appears at the very end, but the rest of the film is played pretty much as a straight historical drama. Confused Americans probably thought it was based on actual history, though it’s basically Le Morte D’Arthur filtered through Tennyson’s Idylls of the King.

As I mentioned in my post on Excalibur, Arthurian legend is a tangled thicket of plots and subplots, many of which repeat or contradict each other, so the first job of a screenwriter is to hack a clear path through it. The writers of Knights of the Round Table (Talbot Jennings, Jan Lustig, and Noel Langley) actually do that quite intelligently, and while purists may mourn the loss of the Lady of the Lake etc, what’s left works fairly well as a film.

The whole boyhood of Arthur is jettisoned, and we meet him as a grown man - I think he’s referred to as the ‘Duke of Gwent’. He has a claim to the throne of all England, which is contested by his half-sister Morgan le Fay and her lover Modred. Arthur is advised by Merlin, but this Merlin seems more a wise old counsellor than a sorcerer: the nearest he gets to magic is lifting aside a swag of fake ivy to reveal the sword Excalibur stuck in its anvil. Drawing the sword proves Arthur is the rightful king, but Morgan and Modred won’t accept this, and there’s a fairly lengthy war to be fought to establish Arthur on the throne. During the campaign he’s joined by Lancelot, Percival, and various other familiar names, and eventually the Round Table is established, with Modred magnanimously included as a member - this is a mistake, as he and Morgan are still plotting Arthur’s downfall. They see a chance to cause trouble when Lancelot and Guinevere fall in love, but Merlin spots the danger and persuades Lancelot to marry Elaine (who is Percival’s sister in this version) and go off to war in the north. (‘The Picts are in revolt.’ ‘The Picts are always in revolt.’) While he’s there, Percival turns up with an account of how the Holy Grail has appeared to the knights at Camelot - it’s rather odd that we hear about this from him rather than seeing it for ourselves. Then Elaine dies giving birth to a son, Galahad, the revolting Picts surrender, and Lancelot returns to Camelot. Morgan le Fay disposes of Merlin (by poison, none of that sealing him up in an oak tree business), Guinevere’s love for Lancelot is exposed, and civil war breaks out again. Arthur is mortally wounded in battle with Modred. Lancelot throws Excalibur into the sea (from the cliffs at Tintagel, I think) and heads off to avenge him, fighting a duel with Modred at Hay Tor. There’s an odd moment where Lancelot falls off the tor into a pool of that gloopy, granular-looking quicksand which was such an ever-present hazard for the heroes of old movies, and is rescued by his highly trained horse - it’s like something out of The Lone Ranger, and doesn’t really go at all with the prevailing tone of high-minded drama at all…

I thought Modred would end up in the bog too, but he just gets stabbed, which is a bit of a let-down. Then Lancelot and Percival - presumably now the sole survivors of the Round Table - reconvene at Camelot in time for a surprise cameo by the Almighty, who shows Percival a vision of the Holy Grail, tells him that Galahad will become a great and pure knight, and (rather blowing His own trumpet here) announces, ‘Blessed is GOD who lives and moves in all things. AMEN.” The End.

In story terms, it reminds me of books like Mary Stewart’s Merlin sequence which attempt to ground the legend in the sort of 5th Century setting where the actual Arthur might have existed, if he existed at all - it’s all plots and politics instead of magic, and some of the personal relationships are quite well drawn. (Lancelot at one point mentions that he and Arthur have come all through the war together, which reminded me that this was made less than ten years after the end of the actual War: close friendships formed in army life would have been a common experience for a lot of the audience.)

Visually, however, it’s pure Ivanhoe-ish mediaeval fantasy, with plate armour, floofy helmet plumes, colour-coded horses, massed tournaments, the splendour falling on castle walls and snowy summits old in story, etc. A lot of it is very spectacular too - I think the exterior of Camelot is a set (?) but it’s enormous, and populated by a huge cast. There are a couple of very big battle scenes too. These days, whenever there are more than about fifty extras on screen you can assume most of them are computer generated, but in Knights of the Round Table they and their horses are all real, so you have to admire the organisation that went into these scenes, if nothing else. (Some of the extras went on strike, apparently, shutting down production for a month.)

That said, I’m not sure director Richard Thorpe really knew what to do with all his sets and extras and his anamorphic lenses (the trailer is SO excited about CinemaScope). The direction and photography are workmanlike, and only one shot really sticks in my mind - a cavalry charge where the camera races along just ahead of a line of war-horses as they gather speed and the thunder of their hoofs fills the soundtrack. It features heavily in the trailer, but here’s a rather grainy screen-shot.

The acting is a bit so-so too: Mel Ferrer is a good Arthur, but Ava Gardner is a dull Guinevere, and Robert Taylor’s Lancelot was a bit wooden too. They’re none of them helped by ye Olde Worlde dialogue,  (‘God grant long life to this Table Round!’) and their American accents often make it feel like a Western, with Camelot instead of Fort Laramie and Picts instead of Apaches. (The endless riding-around-on-slightly-speeded-up-horses adds to that impression.)

Further down the cast list, lots of British actors give reliable support, though there weren’t as many familiar faces as I’d expected. Stanley Baker in a ginger wig is a hissable Modred, and Desmond Llewelyn turns up as a herald. (Gabriel Woolf, who plays Percival, went on to play Sutekh in the Doctor Who story Pyramids of Mars, it says here.) Veteran English actor Felix Aylmer is a wry, slightly stagey Merlin.

So is Knights of the Round Table worth watching? That depends. It’s very much of its time, and it would probably make good comfort telly if you’re curled up on the sofa with a cold and a mug of Lemsip. But if you’re writing an ill-advised blog series about Arthurian films it’s fairly essential viewing, because it’s the big-budget crystallisation of a vision of Arthur and his world the Victorians would have recognised. That same vision echoes through films, TV, and children’s books, throughout the first half of the 20th Century, until it starts to be replaced by the more crepuscular, paganised vision of Gawain and the Green Knight and Excalibur.

When and where that change first began to occur I haven’t been able to pinpoint, but I shall keep looking…