October 05, 2021
I don’t use a Windows computer, but if I did, I imagine that irritating anthropomorphic paper clip would be popping up about now to say, ‘It looks like you’re starting a lengthy occasional series of blog posts in which you try to watch every Arthurian film ever made.’ And I suppose I am, although I doubt I’ll actually be able to find all of them, and there’s no way I’m sitting through that Clive Owen one again.

It’s liable to take a while too, but here to be going on with is Episode 4, in which I take my very first look at what must be one of the most eccentric yet accurate versions of an Arthurian story ever committed to celluloid. 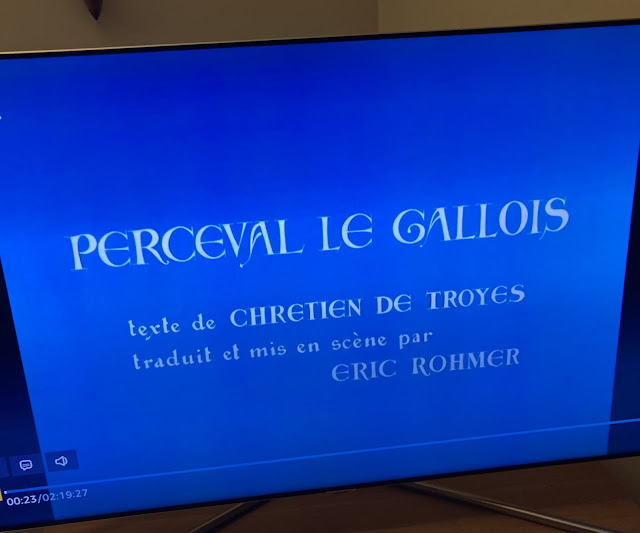 The previous Arthurian movies I’ve written about (Excalibur, Gawain and the Green Knight, and The Green Knight) all share a similar aesthetic: filmed among the mountains, woods and waterfalls of Wales and Ireland, they draw much of their visual power from nature, landscape, and a certain wintry light reflecting from their heroes’ armour. Éric Rohmer’s Perceval le Gallois (1978) takes a startlingly different approach. The entire film is shot in a studio, and there is no attempt whatsoever to make it look like the real world. Instead, it resembles the landscapes in mediaeval paintings, with toy-like castles, abstract rocks, stylised, metallic trees, lawns of painted flowers, and stripy ploughed fields. 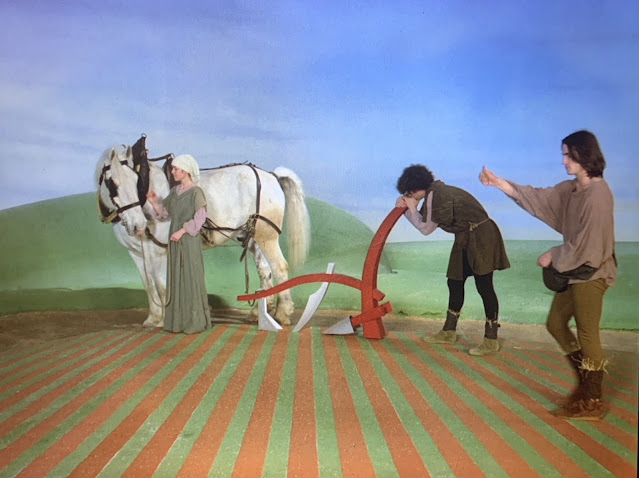 Where a lot of films set in the Middle Ages stress the grime and discomfort of the pre-modern world, this one presents it as a flawless dream-space, illuminated by soft lighting which seems to come from everywhere at once. (The director of photography is the great Nestor Almendros, a regular Rohmer collaborator, and it’s a huge change of style for both of them. Almendros is usually noted for his use of natural light. He must have been shooting Terrance Malick’s Days of Heaven at around the same time - it’s hard to think of two more different films.) 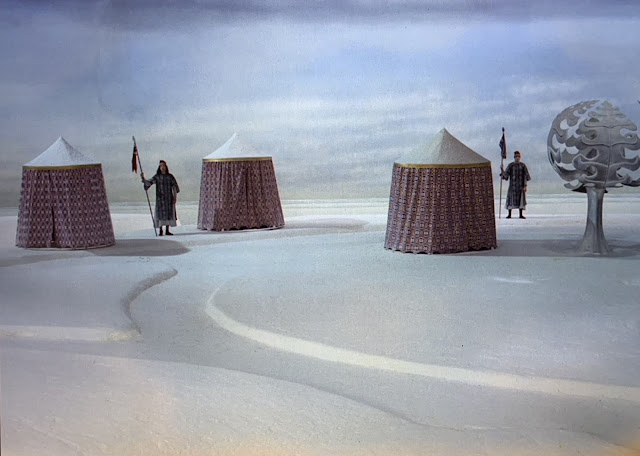 The story is adapted by Rohmer from a romance by the 12th Century French poet Chrétien de Troyes. Although he was obviously drawing on older stories, Chretien was the first to put down in writing many of the elements of the Arthurian legend which are familiar to us today - including the love affair between Lancelot and Guinevere, and the Holy Grail, which makes its first appearance in Perceval le Gallois. 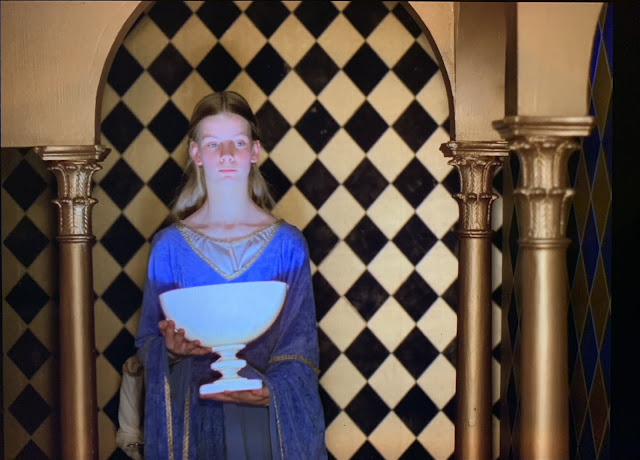 In the film, as in Chrétien’s poem, Perceval (Fabrice Luchini) is a youth brought up in total ignorance of the world by his widowed mother. When he meets a band of knights in the forest near his home, he thinks at first he they must be angels, but when he realises the truth he sets out for King Arthur’s court to become a Knight himself. Various adventures ensue, some of which I suspect drew big laughs in Chretien’s day - Percival is pretty gormless, behaves badly, and makes all sorts of gaffes. Later he visits the mysterious castle of the Fisher King, where he witnesses a strange procession bearing a bleeding lance and the Holy Grail. Perceval is too polite to ask what that’s all about: the castle vanishes, and he is scolded for his silence by a girl with startling hair. Soon afterwards, the story shifts focus to Gauvin (or Gawain - played by Andre Dusollier), and we follow his story for a while, before abruptly returning to Perceval. 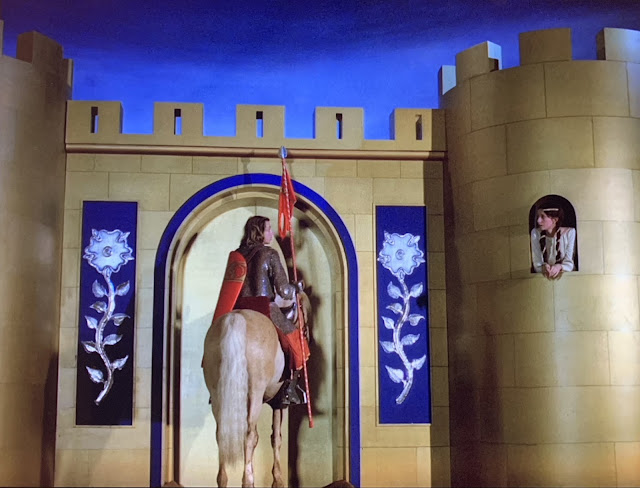 Most Arthurian romances seem to unfold like this, full of characters and incidents that look as though they’ll play a further part in the plot until you realise that there isn’t really a plot in the sense we expect, just a loose series of events, ranging in tone from broad comedy to bewildering religious mysticism. The landscapes the heroes ride across are more psychological than geographical; a nebulous, borderless world where occasional castles and pavilions stand like playing pieces, offering adventure. Most Arthurian films naturally try to tighten their stories up a bit, imposing a narrative structure that will be more familiar to modern audiences. Not so this one, which plays its source material completely straight.

The result hardly feels like a film at all. Rohmer’s camera is unobtrusive, sometimes slowly panning to follow a character across the set or reveal a new speaker, but mostly content to remain stationary, so it’s more like watching a strange but beautiful play, where the scene changes happen by magic, and the actors are forever arranging themselves into compositions which seem to have come straight from a painting. Adding to the theatricality is a chorus of actor-musicians who provide the soundtrack and play a variety of different roles in the story. (The film often resembles a concert of Early Music. Towards the end it pretty much turns into a passion play with a sung text.) 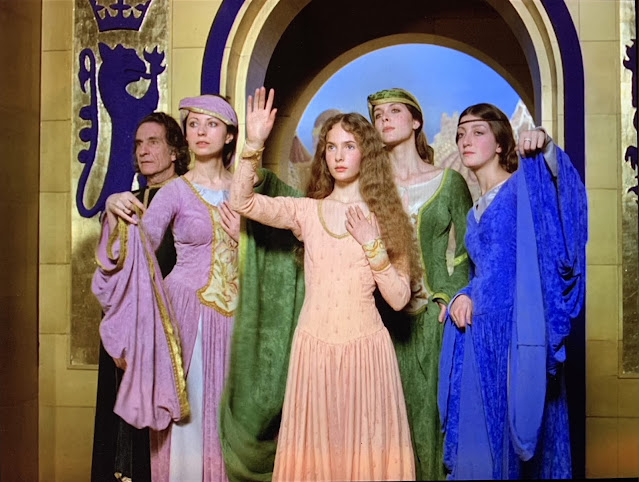 The costumes are gorgeous, and seem to have come straight from an old-school book of historical dress. The horses are real, and so is the armour, as far as I could tell, while the duels have a certain intensity to them, which I think is important in tethering the action to reality - if the chain mail was knitted and the broadswords were plywood it might be a step too far. The acting, too, is naturalistic - or as naturalistic as it can be when the actors are speaking in verse and sometimes narrating their own characters’ actions. There are some good faces among them. I really liked this lady, who crops up in lots of small roles, with her wry expressions and funny little hand gestures. (When I looked up the cast for this blog it was a shock to see all the handsome young performers I was watching just last night turned puffy and wrinkled with age, but she has not grown old as they that are left have grown old, for she is the actress Pascale Ogier who, alas, died tragically young in 1984.) 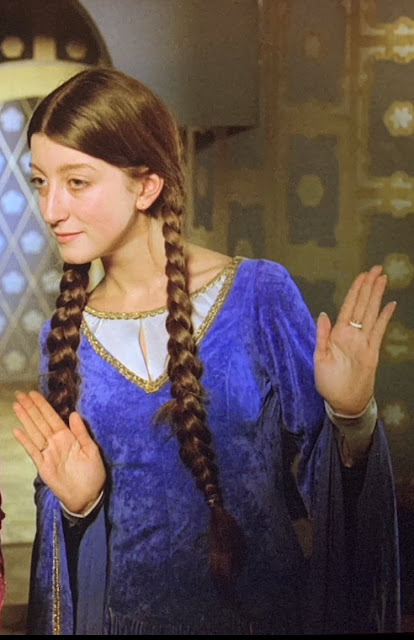 It’s hard to know what to compare Perceval le Gallois to. The cheerful artificiality sometimes reminded me of the children’s TV of my youth - which was probably influenced by the kinds of 1960s theatre experiments which I imagine also fed into Perceval le Gallois. On Twitter earlier I compared it to Playaway, but perhaps a more accurate point of reference would be that weird East German fairy tale The Singing Ringing Tree, which creeped out so many of my contemporaries when it was shown on children’s telly here.
I don’t think Perceval really had much influence on anything else either - though it seems to have been a fairly massive commercial and critical flop, so maybe that explains why other film makers weren’t rushing to aboard the sackbut-and-Sangreal bandwagon. But John Boorman must have been gearing up to make Excalibur when it came out and I wonder if that film’s studio-bound final battle and the flat red sun which looms above it owe something to Rohmer’s airless landscapes. 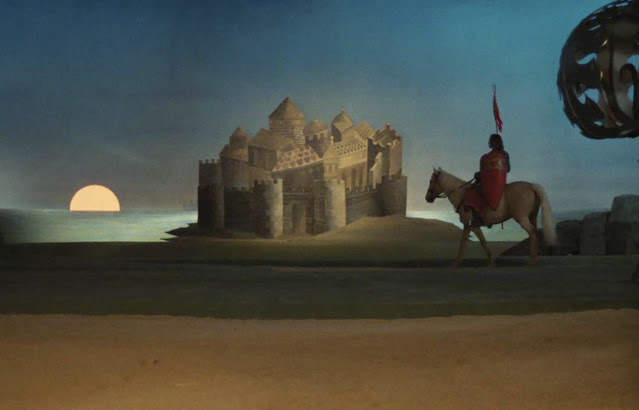 In the end Perceval le Gallois is just its own thing, and you’re either going to find it highly arch and irritating, or love it. I'd always assumed it was just a strange Nouvelle Vague experiment, and only watched it because I’ve been stumbling across references to it for forty years and was curious. But I was surprised how quickly it drew me in, and how much I enjoyed being immersed in its world. If I’d known I was embarking on a series of Arthurian movie blogs I might have started with this one, because it’s so loyal to its source material that it’s like visiting the spring from which all the others flow. If you have 140 minutes to spare, I’d definitely recommend giving it a try. It feels like a film from a completely different civilization, and I suppose, in a way, it is. 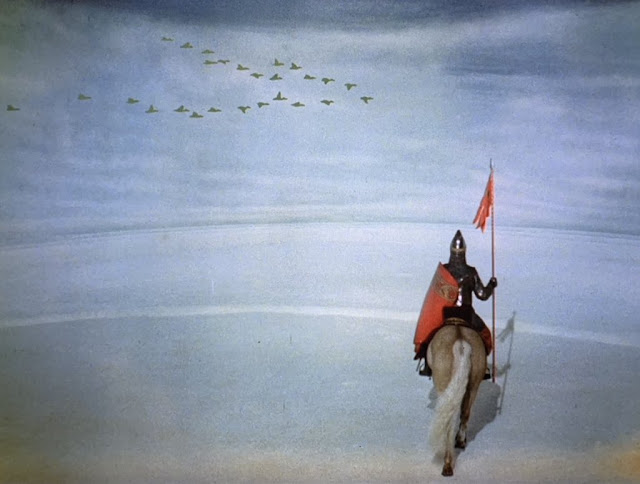 I found Perceval le Gallois available to rent on Amazon Prime for 99p. It says English subtitles aren't available, but they worked fine for me.
Thanks to Sarah McIntyre for all the screenshots! She watched the film along with me, and you can find her thread about it here. 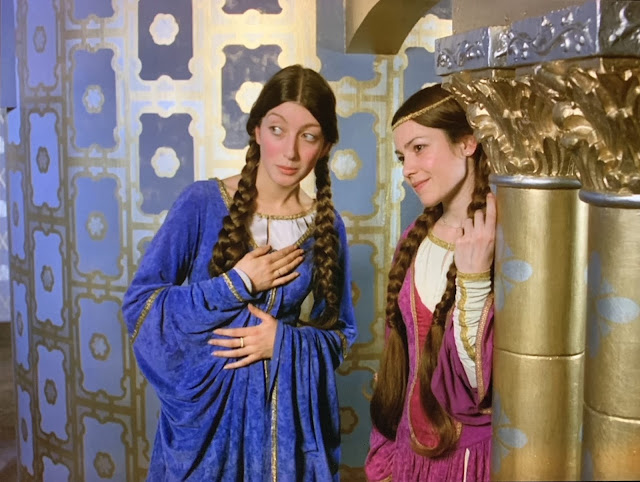