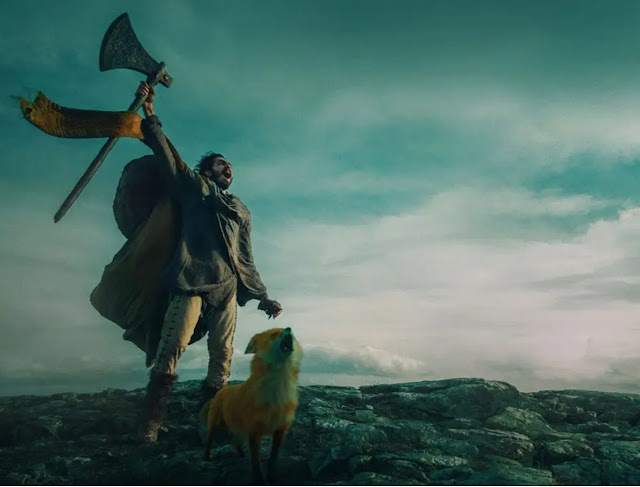 I’ve been waiting a long time to see David Lowery’s The Green Knight. It’s been forty years since there was a serious attempt to put Arthurian legend on the big screen, and this one’s release has been delayed several times by the pandemic. Now it’s finally here (in cinemas, and streaming on Amazon Prime). And maybe it’s a case of expectations running too high, but I was a bit underwhelmed.

I’m not entirely sure why. The photography is beautiful, the costumes impressive, the score haunting, the acting strong. When it wasn’t being determinedly artsy-fartsy it reminded me of Barry Lyndon (there are some deliberate references, I think - a long tracking shot as Gawain rides away from Camelot along a raised moorland road, an encounter with robbers, the candle lit interiors of Sir Bertilak’s castle). When it was being determinedly artsy-fartsy it was more like the dreamlike grail quest sequences in Excalibur: Dev Patel’s Gawain stumbles around on a lot of Irish mountainsides in very much the manner popularised by Paul Geoffrey’s Perceval, and he even gets to do an underwater bit. But Excalibur is an almost bizarrely un-self-conscious film, and Green Knight is quite the opposite: it feels as if it’s constantly sneaking glances at the audience to see if they’re clocking just how cool it is.

And a lot of the time it is very cool. The journey to the Green Chapel takes up only a few stanzas of the poem, so adaptations tend to pad it out. David Lowery inserts a meeting with the ghost of St Winifred which has nothing to do with the original text but felt convincingly odd and mediaeval. There’s also an encounter with some giant CGI weirdos who are perhaps meant to be the ‘ettens’ Gawain meets in the poem. They looked a bit too sci-fi for my liking, but they might be a hallucination, or a magic mushroom trip. There’s a good talking fox too. It’s seldom clear what is real and what is in Gawain’s mind, but in a film like this that isn’t a problem.

What is a problem is the rather lugubrious tone, and the odd take on Camelot. Arthur and Guinevere look like junkies or vampires, and their court seems joyless and sinister. I’m not sure what the reasoning is - it feels very modern, very American, very Game of Thrones. Perhaps a modern film maker just can’t present a feudal monarchy as an enlightened golden age. Well, Arthur can take it - I’ve portrayed him in a less-than-flattering light myself. But it skews the story in odd ways and makes Gawain’s quest seem fairly pointless from the start. A journey out of civilisation into the wild is less gripping if civilisation doesn’t look like somewhere worth being in the first place, unless that’s the point and the wilderness turns out to be better. But Green Knight is decidedly un- Romantic, and the world beyond Camelot’s walls seems just as grim. Everything in this world is corrupt, everyone is flawed, and nature is creepy and unwelcoming. There is a lot of emphasis on rot and decay.

Oddly, the forests through which Gawain walks and rides are all pines, where you’d expect the oaks, ashes, and hornbeams of English folklore.  It seems a strange choice to come all the way to Ireland and shoot in a conifer plantation - they might as well have filmed in Oregon. But maybe broadleaf trees would be too green - this version of the Green Knight is more of a dingy, field-grey knight, and the photography favours washed-out, lichenous tones.

Lowery has beefed up the role of Morgan le Fay (Sarita Choudhury), who pops up at the end of the poem like a Scooby Doo villain to reveal that the Green Knight was her creation all along: here, as Gawain’s mother, she’s present from the start, setting the whole story in motion. It makes dramatic sense, but freights the film with a lot of twisted mother/son stuff. I don’t think any of it is present in the poem, but it seems to be Lowery’s main concern. Re-tellers of old tales are allowed to bring their own ideas with them, and I suppose it makes a change from the father/son stuff which gets shoehorned into so many films. But it throws the later scenes off.  Sir Bertilak and his lady get short-changed: the game they play with Gawain, which forms such an important part of the poem, is only gestured at here. Worst of all, the final meeting at the Green Chapel is fumbled: the Green Knight’s identity is left unexplained, as is Gawain’s fate. It’s an unsatisfying ending, and you have to sit through a lot of film to get to it.

But the images and symbols linger. Maybe I’ll watch it again and see if it grows on me. At the moment, for all its chilly beauty, I have no idea whether I liked it or not. I suspect I wasn’t meant to. 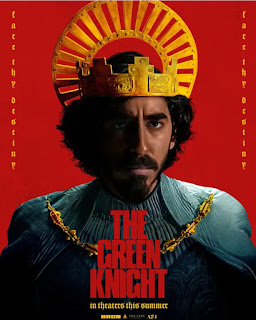 If you’re unfamiliar with the original poem, Simon Armitage’s modern English version is a good read.