Foundation is one of those famous science fiction classics I’ve never got round to reading. I did try, back in my Star Wars addled early teens, but I gave up after a chapter or two. Having watched the Apple TV adaptation, I picked up a copy to see how it compared, and I can see why I was put off. Published in the ‘50s, but made from short stories written for the pulp magazines of the ‘40s, Foundation is an odd beast. In a vast galactic empire of the far future, a scientist named Hari Seldon predicts imminent collapse, and sets up a foundation intended to preserve human knowledge through the coming dark age and help build a new society. The book hops through the centuries, giving us little vignettes to show how his descendants are getting on. There is very little description of people or places. It’s curiously male-dominated even by the standards of ‘40s sci-fi - often in those old pulp stories the hero’s missus or the Professor’s Beautiful Daughter get a look in, but in Foundation all the characters are men, as if Asimov hadn’t noticed women exist. But that doesn’t really matter, because the characters are barely characters at all, just ciphers whose only purpose is to expound Asimov’s ideas. They have names, but not much else: we don’t know what they look like, what they’re feeling, whether they have families, even what they wear. That’s not what I wanted from a big SF novel at all: I was after non-stop action, with vivid descriptions of wildly imagined worlds and people in weird hats.

But Foundation was hugely influential, of course. It didn’t invent galactic empires, but it’s one of the key works that established the concept in the sci-fi imagination: Dune and Star Wars are both riffing on it, and when The Hitch-Hiker’s Guide to the Galaxy waxes nostalgic about the good old days of the Galactic Empire it’s referring to a civilization very much like Asimov’s. And because of that, even though I’d never read it before, it’s influence is all over Railhead too.*

Anyway, it answered the question that made me read it, which was, how much of the TV series comes from the book? And the answer is, virtually none of it. (Though there are a lot of sequels and prequels which I haven’t read, so it’s possible the show’s creators David S. Goyer and Joel Freedman have mined them for ideas.)

The basic set up is the same - Hari Seldon (Jared Harris) has devised a mathematical/sociological discipline called psychohistory which predicts the empire’s collapse and a looming dark age. (It all feels distinctly timely in 2022.) Seldon’s warning annoys the emperor, who permits him to set up his proposed foundation but exiles him and his followers to a backwater planet. So far, so like the book. But onto this armature the show piles so much of its own invention that it’s almost unrecognisable. 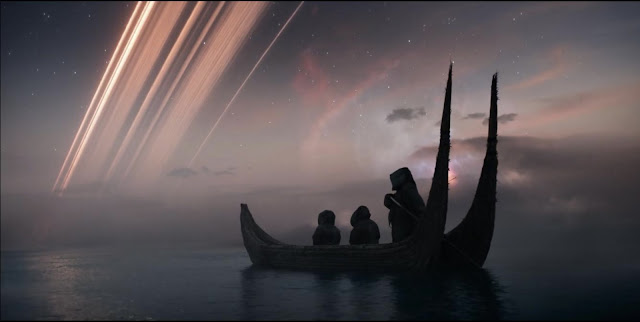 But this is a good thing. The worlds which were so textureless in the book become vivid and memorable on screen, from the dying water planet with its sky full of rings which maths genius Gaal Dornick (Lou Llobell) leaves behind in episode one, to the Byzantine splendour of the imperial palace on Trantor, to the gritty deserts of Terminus where the Foundation is established, and the more picturesque desert planet where the Emperor confronts the leaders of a female religious cult. Monolithic starships provide transport between them by means of a spinning gyroscope-like section which generates black holes for them to fall through. (When the derelict warship Invictus turns up, after jumping randomly through space for hundreds of years with its long-dead crew, it’s an earlier model - the whole thing has to spin.)

Like The Rings of Power (which I wrote about recently), Foundation sets a bunch of different storylines running then and skips to and fro between them. Unlike The Rings of Power, it takes its time with each, sometimes spending most of an episode with one group of characters. The characters themselves are strong, the actors well-cast: Jared Harris is suitably charismatic and gnomic as Hari Seldon, and Leah Harvey brings an endearing, frowny fierceness to Salvor Hardin (like Gaal Dornick, she’s a name from the book, fleshed out and ‘gender flipped’ as I believe the cool kids say.) Alexander Siddig, who used to be the doctor on Deep Space Nine, has aged into a very good, slightly sinister character actor and has a cameo in the first episode as a prosecutor at Seldon’s trial for treason. Clarke Peters, a reassuring presence ever since The Wire, turns up as Salvor’s dad. Importantly, the show finds ways to keep some of these characters alive and kicking throughout the hundreds of years it will take to tell its story, rather than having to introduce new ones all the time. 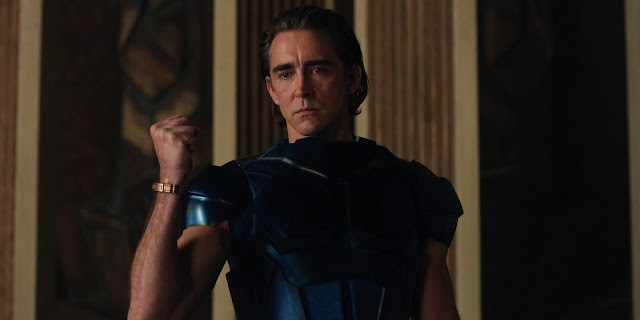 The most dramatic instance of this is the Emperor himself, or Emperors, I suppose, since he had himself cloned back in the empire’s heyday, and there are always three of him - a youth, Brother Dawn (Cassian Bilton), an old man, Brother Dusk (Terrence Mann), and the vigorous Brother Day, who trains up his younger self and is advised by the older one. Brother Day (or the several Brother Days whom we meet in the course of the series) is played by Lee Pace (from Pushing Daisies and my favourite, Halt and Catch Fire) and he’s as magnificent as you’d expect. Weirdly dignified despite some off-the-wall wardrobe decisions (skirts, blue plastic cuirasses, bare arms) he’s capricious, cruel, tender, arrogant, tragic, often all at once. At one point he kills a man just by shouting at him.

Everybody (including me) has been raving about Andor lately, but it’s worth remembering that Andor isn’t science fiction - just a competently-written wartime thriller in fancy dress. Foundation is the real deal. It doesn’t have Andor’s consistency, but it’s much more ambitious, and plays with far bigger ideas. Its weakest stretches are those where it seems to be sticking to the rules of sci-fi TV - armed stand-offs on terminus, skullduggery in Trantor’s urban sprawl, creepy discoveries on the Invictus. They’re all perfectly watchable, and even gripping, but it sometimes feels as if I’ve watched them before - a bit of Star Wars, a hint of Blade Runner, a soupçon of Event Horizon. At its best, Foundation achieves something quieter, grander, and stranger than any of those. There’s a stunning sequence about the clone-emperors which follows the final days of the current Brother Dusk, preparing rather reluctantly for death while a new baby Brother Dawn is born from the vats in the imperial basement. It’s like a self-contained short story, and it serves as both a metaphor for the stagnation of dynastic rule and a haunting parable about ageing and mortality.

Also, there are people in weird hats. 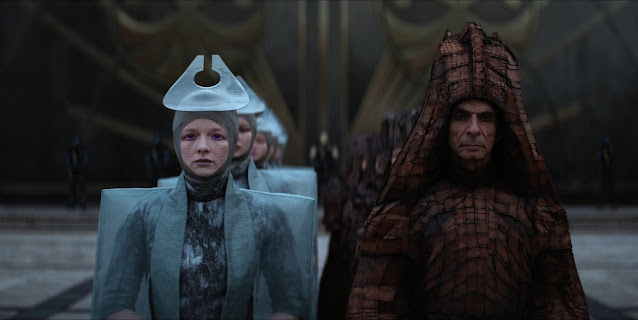 Foundation is on Apple TV: a second series is currently in production.