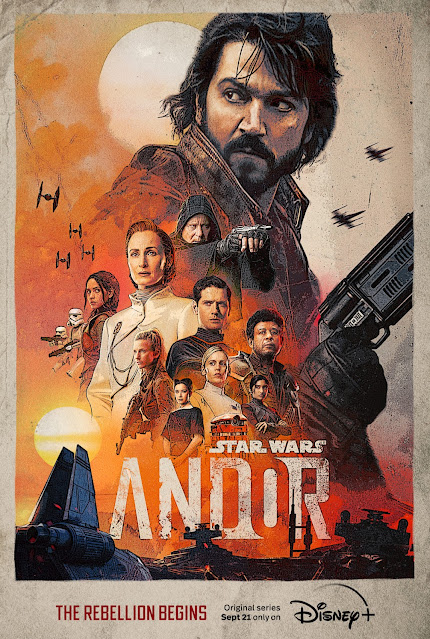 The original Star Wars film knocked my socks off back in '77 when I was eleven, but I've never had much interest in the various prequels and reboots, although I've sat through a lot of them happily enough for the sake of all the excellent production design. The Mandalorian was fun when it started, but gradually more and characters we recognise (or are clearly expected to recognise) from other SW things started making cameos, until the galaxy far, far away seemed to shrink to the size of a small town where you're constantly bumping into the same people. I’m sure it still thrills its target demographic, it’s just not for me.

So I wasn’t planning to watch Andor, and only stuck it on as background noise while I was working on some of the props for my own little movie. But after an episode or two I noticed the background noise was taking the form of some rather good dialogue, and I started watching it properly. It turns out to be a very intelligent, rather old fashioned spy/resistance thriller. Unlike the other Star Wars shows I’ve looked at, in which each episode builds to a pew-pew laser battle where you already know who's going to win, it's a slow burn - ponderously slow at times, but well worth sticking with, as the action when it does come has much more impact.

Andor is the story of Cassian Andor (Diego Luna) whom we first meet as an interstellar lowlife, living on a brick-and-blast-furnace industrial planet and surviving on nothing but his quick wits and an uncanny resemblance to Let It Be era Paul McCartney. Over the course of twelve episodes he’s gradually drawn into the nascent rebellion. If you’ve seen Rogue One, the film to which the series is a prequel, you’ll know he dies at the end, which gives you a sense of the show’s tone. It’s so sombre that it’s quite disconcerting to remember that the complicated, morally complex story it unfolds will eventually be resolved by some Flash Gordon shenanigans involving comedy robots and space wizards. It fits into the Star Wars universe in roughly the same way that Schindler’s List fits into the ‘Allo ‘Allo universe.

What makes it work? For a start, there are no Jedi - they’ve always been my least-favourite part of Star Wars and Andor’s creator Tony Gilroy has made a smart move by returning to the first film's idea that most people in the Galaxy have barely heard of them. I don't think the Force even gets a mention.

Nor do we get to see many droids or star destroyers or the other paraphenalia of the movies. This is Star Wars as viewed from ground level, and we spend our time down among labourers, small-time thieves, would-be rebels, and the Imperial personnel whose job it is to police them - not elite stormtroopers but regular troops and minor functionaries on the make. The dialogue that caught my attention in the first few episodes was mostly exchanges between a keen-as-mustard young Imperial official called Syril, his bullish NCO, and the bored and lazy security team he’s trying to persuade to track down Andor. It's made better by the fact that Syril is played by a chipper young American (Kyle Soller) and his underlings are mostly grumpy, workshy English or Scottish jobsworths -  it makes you proud to be British.

For Andor is clearly set in the British quadrant of the galaxy. Almost all the actors are Brits, and so are most of the planets. The Gestapo-ish Imperial Security Bureau are operating out of Canary Wharf, and when Andor tries to lie low on a resort world it looks like space-Worthing, with aliens in deckchairs lined up along a windswept prom.

People of my age have seen a British take on Star Wars before: it was called Blake's Seven, and Andor often feels like its big-budget reboot. Some of it is even shot in the same quarries. The early scenes with a tribe of feral children discovering the wreck of a spaceship whose crew have been killed by a leak of deadly gas which turns their corpses yellow is exactly the sort of thing that used to give me the heeby-jeebies on Monday nights in 1978. The grim prison Andor gets stuck in felt SO Blake's Seven that I was actually surprised to see the Imperial logo on the guards' black uniforms - I'd been subconsciously thinking they were Federation.

It also does the Blake's Seven thing of allowing the antagonists to be actual people rather than just faceless baddies - a far more unsettling proposition, and a new departure in Star Wars, I think. Most of them are just getting on with their jobs, or trying to shin up the promotion ladder. When the raid on Andor's home planet ends in chaos in episode three it does so not because young Syril and his team are monsters, but for the exact reason such operations go pear-shaped in real life - the troops are poorly led, poorly trained, and panic the same way you or I would when their superiors’ half-baked plan starts falling apart. Syril is really quite sympathetic, although the emphasis is definitely on the pathetic. But there is a good hissable villain shaping up in the form of Dedra Meero (Denise Gough). She's superbly brittle and dangerous, and all the more effective because we're lured into sympathising with her at first as the only woman in the all-male ISB.

The rebels she hunts are equally well-drawn: not yet an Alliance, they range from nervy aristocrat Mon Mothma to ruthless terrorists who don’t care how many eggs get broken in the making of their revolutionary omelette. (I gather the plan is to make only two series, leading up to the beginning of Rogue One, but I think there should be a third, set after the Empire’s fall, dealing with the inevitable betrayals and purges that will break out among the victors.)

Of course, this kind of determined miserablism can feel just as fake as morally weightless goodies-vs-baddies adventures if it's not leavened with a good helping of humour, and there aren't a lot of laughs in Andor. In the jailbreak scene, the character who has led the breakout from an island labour-camp doesnt dive off and strike out for shore with the others because he can't swim. You'd think one of the 15,000 men he's just led to freedom would help him - and perhaps they did, I'm fairly certain he'll pop up again in a future episode - but in the moment it felt a bit too much, a bit contrived. There are a few things like that, which display a sort of everything-is-awful adolescent cynicism. But most Star Wars is kids' stuff, so some teenage stuff makes an interesting change, and a lot of Andor is surprisingly grown up stuff. I'm not sure I've seen anything better written or directed on TV this year.

Andor is available for streaming on Disney Plus.