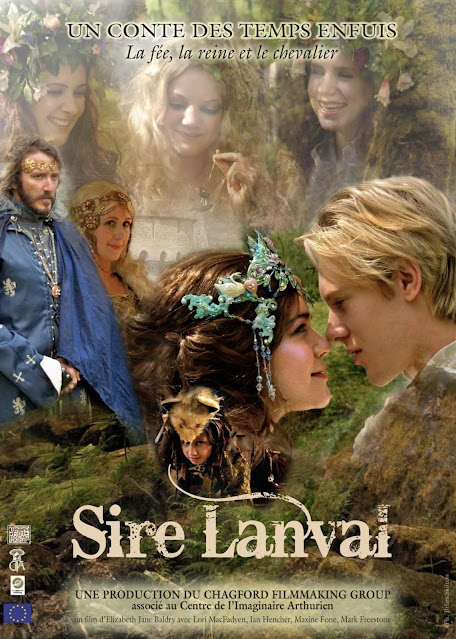 A lot of the Arthurian films and TV shows I’ve watched while writing these blog posts are basically war stories, full of pitched battles, duels to the death, and the clash of sword on armour. But a lot of the Arthurian literature that inspired them isn’t like that at all. One of the reasons for Arthur’s enduring popularity is that his kingdom was an ideal realm of peace and justice, and even when violence does have to be meted out to some wicked knight it’s usually in the rather codified form of a joust: when he loses, he’s just packed off by the victor to Camelot to pay homage to Arthur or to Guinevere. What a lot of the stories are more interested in is LOVE. 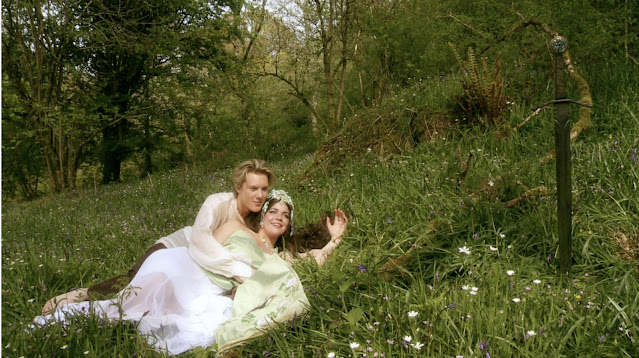 Sir Lanval, which this film describes as ‘an Arthurian fairytale’ was written by Marie de France in the late 12th Century for the court of Henry II of England and his French queen, Eleanor of Aquitaine. It’s a good story, and I’m surprised it’s not better known. This 70-minute adaptation, rather delightfully for me, is a local effort by the not-for-profit Chagford Filmmaking Group with the help of local volunteers and the aid of grants from the EU Regional Development Fund and South West Screen. There’s an interview with director Elizabeth-Jane Baldry here in which she talks about its creation. (She also co-wrote the screenplay with author Ari Berk, and composed the beautiful score.)

You can’t call Sir Lanval an amateur film - the main cast appear to be trained actors and the production values and technical standards are at least up to TV quality. But nor is it a commercial film, and the results are curious and rather charming. It’s not exactly my cup of tea - its the sort of film where you fear interpretive dance is liable to break out at any moment - but it certainly makes a change from the murky ultraviolence of Arthur and Merlin… which I suspect had similar budgetary constraints and didn’t achieve anything nearly so individual. And you have to admire the care that has gone into the costumes, the sets, and the elaborate arrangements of ivy and flowers which decorate the Alan Lee-designed pavilion of Lady Tryamour, and the heads of her two fairy ladies-in-waiting. 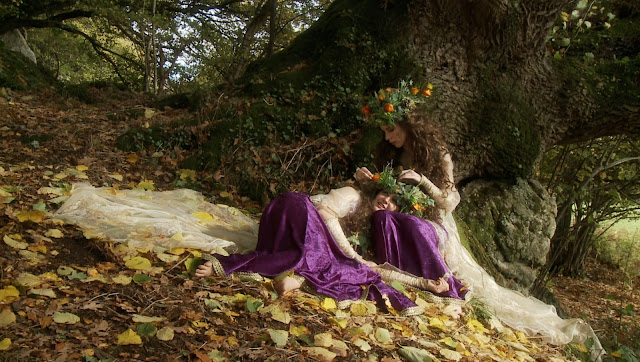 I was going to call this pair ‘annoying fairy ladies-in-waiting’, but it seems redundant - most fairies are annoying, and as fairies go I guess these two aren’t so bad. They act as a sort of chorus, introducing the story, and popping up at various points to comment on the action, or to lead Sir Lanval to their mistress, Tryamour.

Sir Lanval (Florian Hencher) is just plain Lanval at the start, a beautiful youth wandering through the Dartmoor oak woods, perhaps wistfully wishing he lived in the early 1980s where his outfit and haircut would easily land him a career with a New Romantic band. The fairy lady Tryamour (Lori MacFadyen) is certainly impressed: she makes him her lover, and showers him with gifts including a slow motion horse, and a purse of gold which constantly replenishes itself. Tryamour’s only condition is that Lanval must never speak of her, or mention her name, to anyone in the mortal world. 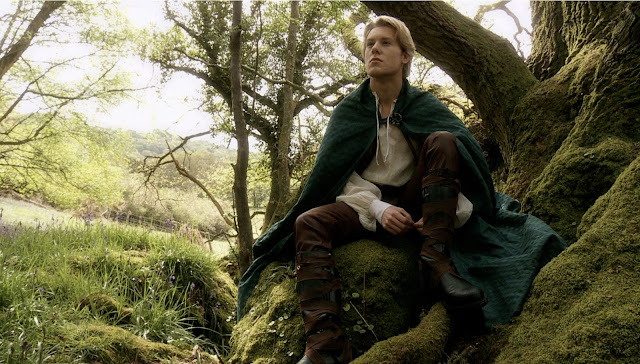 At first all goes well - with his bottomless purse and swish new outfits Lanval is a big hit at Camelot, and soon wins the friendship and confidence of King Arthur, who makes him a knight. But Guinevere, the villain of this tale, takes a fancy to him, and he rejects her advances by telling him he loves another lady. Although he hasn’t mentioned Tryamour’s name this still breaks his promise to her: his bottomless purse dries up, and his glad-rags turn into actual rags.

But worse is to come - the slighted Guinevere cooks up a story that Lanval has assaulted her, and Arthur is forced to sentence the young man to death… 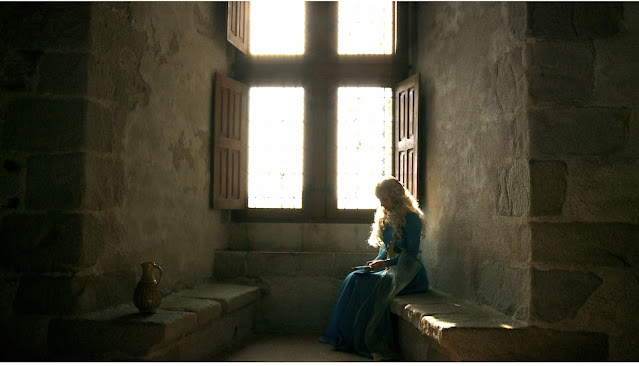 It’s all very capably shot in Dartmoor woods, the National Trust property Cothele House, and a beautiful French chateau which seems to come complete with mediaeval re-enactors. There’s no attempt to be accurate to a particular era, with ladies in the gowns and head-dresses of the High Middle Ages and soldiers dressed like Vikings, but it all works somehow, and the scenes shot at Cothele are combined ingeniously with the chateau. Magic is achieved with simple cuts - there are no special effects as such - and is all the better for it. When Tryamour appears walking across the surface of her lake there’s a powerful sense of the uncanny. The weather seems to have been kind to the production: the sun shines on Camelot, and on all Lanval and Tryamour’s trysts among the bluebells. Only when Lanval is tried and sentenced to death on the banks of Fernworthy Reservoir does the traditional Dartmoor drizzle set in. 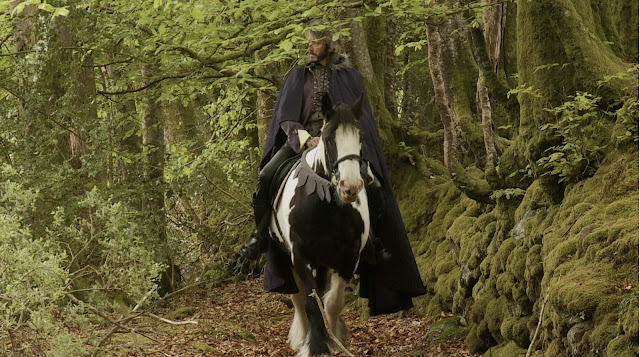 Mark Vernon Freestone makes an amiable, weatherbeaten Arthur, and William Ludwig plays Sir Kay as dour and decent rather than the blustering boor of tradition. Maxine Dubois as Guinevere was the stand-out character for me. Once she begins to set her snares for Lanval a delicious glee creeps into her performance. This is a film that desperately needs some humour in it if it’s not to tip over into camp, and she provides it: the attempted seduction is very funny. I was troubled by her very obvious silver-blonde wig at first, until she takes it off and I realised it’s meant to be a wig, and part of her character’s vanity.

Ms Dubois has something of the silent movie star about her, and the whole film has a stately, slightly otherworldly feel that put me in mind of silent dramas (although there’s lots of dialogue). The simplicity of the interior settings, the clean, bright costumes, and the earnestness of the actors also reminded me a little of Rohmer’s Perceval (although of course it’s not nearly so stylised - what is?). It’s a vision of the Arthurian world the Pre-Raphaelites would have recognised. And I think, once they’d got their heads around the concept of moving pictures, Marie de France and Eleanor of Aquitaine would have enjoyed it too. 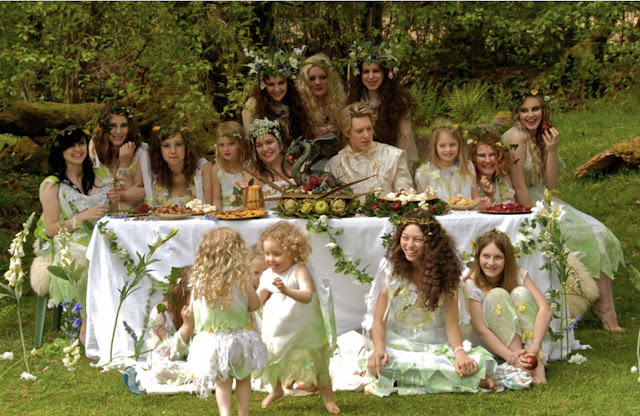 All photos by Brian Skilton. Sir Lanval is available to rent or buy on Amazon Prime.