One of the reasons the Arthurian Legends appeal so much to writers and film makers is that there is no single original version. If there ever was, it was a tale told by some Romano-British storyteller, sitting by a fire in a damp hall, perhaps expounding on the great deeds of a local ruler or late Roman general, and spicing up the action with some motifs borrowed from old Celtic myths. In the centuries that followed, the story grew, and changed. Lots of legends about other heroes got tacked on to it. French and German poets got hold of it and added Camelot, the Grail, and Courtly Love: Malory borrowed from them all in his Morte D’Arthur. Later, everyone from Tennyson to TH White to Rick Wakeman to little me retold the stories, altering them to fit our own vision and reflect our own times. So you can do whatever you like with King Arthur: everyone else has.

I quite liked the previous Guy Ritchie films I’ve seen - the Sherlock Holmes ones and The Man from U.N.C.L.E reboot. They’re big, dumb movies, but they’re lighter on their feet than most, and pretty entertaining. The Man from U.N.C.L.E, for instance, has a nice way of coming at the fight scenes sideways - there's a bit where we watch Ilya Kuryakin sit in the cab of a lorry and enjoy a nice sandwich while the huge speedboats-and-machine-guns battle which would hold the attention of most films rages out of focus in the background.

King Arthur doesn't approach its fight scenes sideways, but it has a similar gonzo self-confidence, so if you’re after an undemanding, CGI-heavy sword-and-sorcery film with a couple of memorable images you could probably do worse.

What it isn’t, in any meaningful sense, is Arthurian. It carries a kind of degraded echo of the basic story - Arthur grows up in obscurity, and proves his right to the throne by drawing a sword from a stone - and a few of the names are the same, but that’s really about it. If you changed those names, you could be watching any knock-off sub-Lord of the Rings fantasy. If you added jokes you could be watching a Terry Pratchett story - the city of ‘Londinium’ - vast, wonderfully detailed, and not really related to the actual Londinium at all - looks very like Ankh-Morpork. (To be fair, there are some jokes - or at least some nice little bits of comic business that add a much-needed touch of character.)
Someone involved with the script has heard the story of King Vortigern, and how he tried to build a tower which kept collapsing until the boy Merlin revealed to him that a red and white dragon were constantly fighting in a cavern beneath it. We don’t get the dragons but we do get the tower, which the tyrant Vortigern is building as an add-on to his ludicrously enormous Byzantine stronghold of Camelot. (When we first see Camelot it's being attacked by even more ludicrously huge war-elephants, which gives us a fair idea of what sort of film we’re in for.) Vortigern is in league with three slimy and sinister octo-mermaids, you see, and finishing the tower will give him supreme power because reasons. Can Arthur and his band of mockney rebels, loveable street urchins, and Kung Fu fighters (wait, what?) save the day?
Spoiler: of course they bleedin' can - you 'avin a larf or what? The film ends with our cheeky young Excalliwag installed at Camelot, knighting his gang, and building his Raaaaahnd Table in preparation for a planned series of sequels which now seems unlikely to materialise. 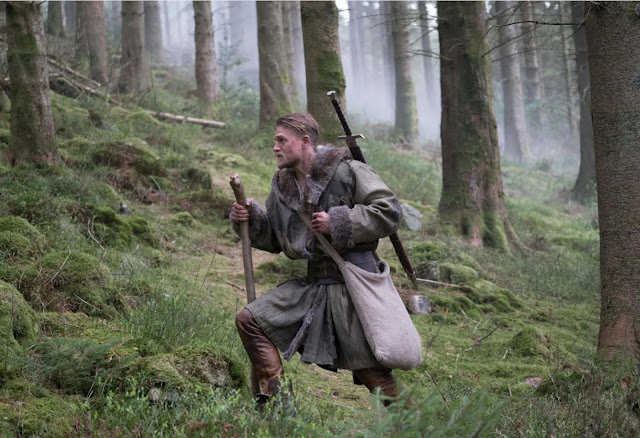 The dialogue is gleefully anachronistic. (“Come on boys: chop-chop.” "Bedivere, yer big posh twit..." The rebels are referred to throughout as ‘the Resistance’) Everyone runs around in leather jackets, T-shirts, hoodies, and pointy fantasy armour - Arthur sometimes sports a kind of sheepskin car-coat, as if the costume designers have confused him with Arthur Daley. There’s a lot of that quick jumping-to-and-fro-in-time exposition stuff that Ritchie does rather well, but it’s so overused here that you end up not knowing if you’re watching what’s actually happening, or a flash back, or a flash forward, so you quickly stop caring. Some of the fight scenes manage to be very intense without ever resorting to chopped off heads and fountains of gore, but the final duel between Vortigern and Arthur is a tedious slug-fest that looks exactly all the other final duels in all the other video game and comic book movies. The colour schemes are mostly variations on grey, black, and sepia, which is why the stills in this edition of the blog look a bit washed out. (Say what you like about Knights of the Round Table but at least they made movies in colour in those days). Some of the locations are very beautiful and well-chosen, but the editing is so twitchy and the storyline so vague that there’s never much sense of the characters inhabiting them. I liked the wintry trees, and this excellent clapper bridge... 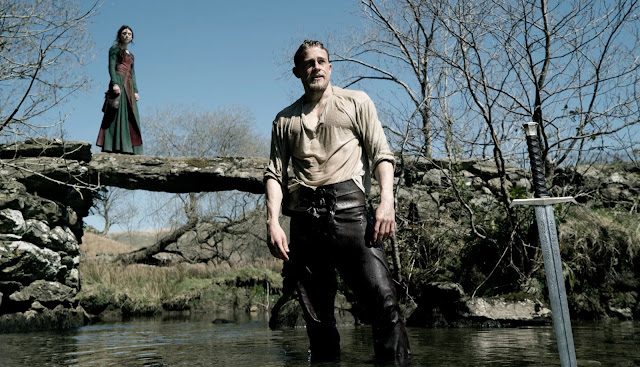 Jude Law gives value for money as Vortigern, Charlie Hunnam does his best as Arthur. Merlin couldn’t be bothered to appear, so he sends a young enchantress to stand in for him, which isn't a bad idea and provides a much-needed female character to offset all the geezers (she's played by the splendidly-named Astrid Bergés-Frisbéy.) She handles the magic - which is all animal-based, culminating in an unexpected and unexplained giant snake - while the wily old counsellor aspects of Merlin’s role are covered by a dignified Djimon Hounsou as Sir Bedivere.

There are also some Vikings.

These Arthurian Film blogs aren’t meant to be about pointing and laughing at bad movies - that would be unchivalrous. So what does Legend of the Sword actually add or bring to the Arthurian oeuvre? There’s a very fast and detailed montage early on that I liked, showing how Arthur grows up and learns the ways of the streets, all set to driving folksy music. (The score, by Daniel Pemberton, is good, I think.)  There’s a very striking shot of the Lady of the Lake deep under water, and a scene where she reaches up to Arthur out of a muddy puddle which is also somehow her lake, suggesting a whole Celtic Twilight notion that any pool can be a gateway to the Otherworld. (The way the sword of power has been given to Uther, becomes the Sword in the Stone, and is lost by Arthur in a momentary wobble and returned to him by the Lady of the Lake, is borrowed from Excalibur, I think?)

There’s an odd sequence where Arthur visits ‘the Darklands’ - it doesn’t serve much narrative purpose and it’s a bit overstocked with CGI beasties, but it’s nice to have Arthur himself as the protagonist of a lonely, dreamlike quest for once.

Oh, and get this! When Uther Pendragon dies he chucks Excalibur up into the air and it comes down and sticks in him and he turns into a stone and that’s what Arthur has to pull the sword out of twenty years later. Which is, of course, bonkers. But it’s bonkers in the same way that a lot of actual legends and folk-tales are bonkers, so I’m inclined to cautiously admit it to the canon.

Also, there’s an idea lurking under all the CG thud’n’blunder which is not a million miles from the idea in TH White’s The Sword in the Stone. It’s the idea that, by spending his formative years among the common people, Arthur will end up a far better king than any of the brutish noblemen who think the job should rightfully be theirs. It would have been good to see that explored in a bit more depth.So… it’s not a good film, and it’s definitely not a good Arthurian film. And yet... It reminded me a bit of a TV series called Robin of Sherwood which used to be on ITV back in the eighties. The traditional Robin Hood tales had been jazzed up with a lot of cheerful rubbish that played fast and loose with the legend, but it had enough goofy energy and just enough of an echo of old stories that I still secretly enjoyed watching it. And that’s how I felt about King Arthur: Legend of the Sword.