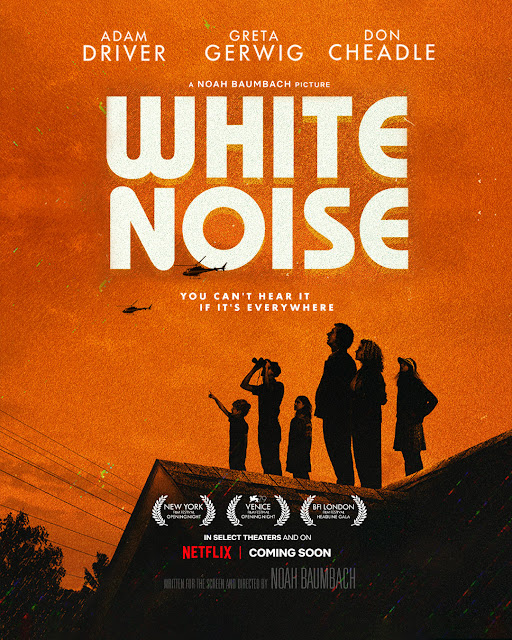 We watched this on New Year’s Day, and it turned out to be a good start to the film-watching year - or maybe a bad one, as it will be a hard act to follow: I doubt I’ll see a better film in 2023. Based on the Don DeLillo novel, it’s a strange, protean thing, shifting from campus satire to disaster movie to neo(n)-noir revenge drama before ending in a mass supermarket dance routine like something out of True Stories. To writer/director Noah Baumbach’s credit, it’s both very funny and very serious - the White Noise of the title is the fear of mortality, I think, which haunts Adam Driver’s hapless and slightly seedy college professor Jack Gladney (the leading expert in ‘Hitler Studies’.) ‘What if death is nothing but a sound?’ he muses at one point. ‘You hear it for ever. Sound all around.’ The comedy - like most comedy, maybe - springs from the absurdity of trying to live everyday life in death’s enormous shadow.

But a lot of Gladney’s everyday life would be absurd anyway. At home his wife Babett (Greta Gerwig) and their four kids are always having three or four conversations at once, peppered with non-sequiturs and garbled factoids (‘The family is the cradle of misinformation.’) The kids are all excellent. Babett is secretly taking mysterious pills. At work, Jack’s colleague Murray (Don Cheadle, tweedy and impish) is trying to build an academic career around Elvis (the two have an incredible Hitler/Elvis lecture-off, intercut with the train wreck that heralds the middle act).

The dialogue comes largely from the book, I think (it’s many years since I read it). It certainly has a distinctive tone, witty, ironic, discursive, peppered with aphorisms.You have to listen hard, for fear you’ll miss something. Even so, I missed a lot, and will need to watch it again soon. It’s a rare thrill to find a film that loves words as much as pictures, and plays so lightly with so many big ideas. 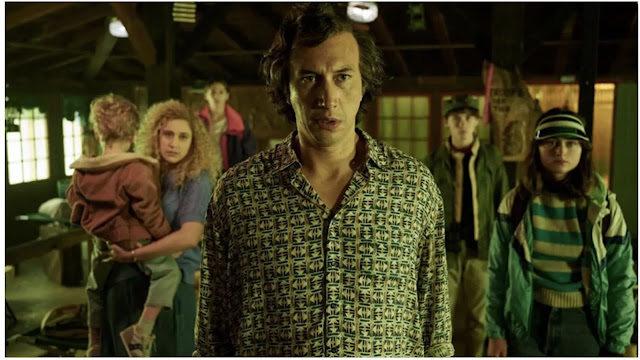 It’s also the best artistic attempt I’ve yet encountered to tackle the pandemic. Mainly because it doesn’t. It’s an adaptation of a forty year old novel, and if it had been made a decade ago the events depicted and the characters reactions to them would be the same. But in the present moment the ‘Airborne Toxic Event’ which leads the protagonists to be evacuated from their town in the middle act inevitably feels like an echo of COVID. The spreading rumours, the growing realisation that this might be serious, the adults’ attempts to reassure the kids about things they are far from sure about themselves, the perverse and contradictory instructions from the authorities, it’s all startlingly familiar.

The lockdown stuff in Glass Onion (my other favourite film of this festive season) already feels oddly dated, and seems largely about signalling each character’s virtue or lack of it according to how seriously they take the mask mandates. White Noise’s catastrophe is universal, and there are no heroes or villains in its makeshift refugee camps. Faced with disaster, everyone grows selfish, helpless, panicky. ‘Don’t we deserve attention for our suffering? Our terror?’ demands Bill Camp, popping up for one of his reliably scene-stealing cameos with a TV set balanced on his head. “Isn’t fear news?”

The evacuation scenes are spectacular stuff: queues of traffic jamming the highways, helicopters circling the spreading toxic cloud. (It’s slightly reminiscent of the evacuation of the area around Devil’s Tower in Close Encounters of the Third Kind, which made me wonder if that inspired DeLillo?) In a more conventional film the screwball escape from the camp would form the climax. In this one the emergency just peters out, the toxicity of the airborne event event unclear, leaving the characters to drift back to their lives. A third of the running time remains. The mystery pills storyline returns, and leads to a confrontation with death and a sort of resolution. But White Noise isn’t a plot-driven film at all, although it’s packed with incidents. What draws you in, and makes the 2-and-a-bit hours fly by, is the tone. Just go with it, and you’ll be carried along like an incompetently-driven station wagon drifting down a creek.