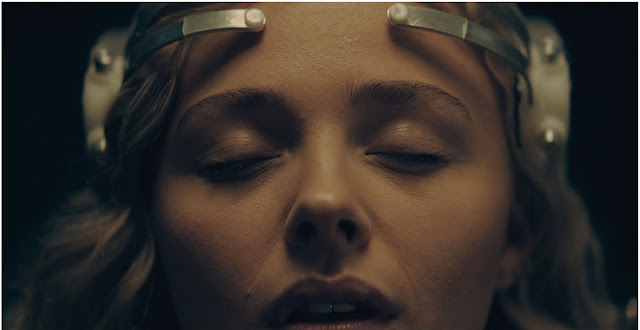 I watched the Amazon Prime series The Peripheral just before Christmas, but only just found time to write about it, and already it seems have dropped off people’s radar. New shows, books, and films seem to be talked about for around a week now, if they’re lucky, before attention shifts to the next new thing. The way the internet has accelerated the speed of cultural discourse is presumably something William Gibson saw coming: from his cyberpunk novels of the mid-1980s to more recent works like Pattern Recognition, he’s always displayed a keen eye for cultural/technological trends. (Although the great opening line of Neuromancer - ‘The sky above the port was the colour of television, tuned to a dead channel,’ must be a bit lost on readers brought up in an age of digital tellies.)

The Peripheral is based on a Gibson novel, of course, and it’s interesting to see what has survived the adaptation process and what has been ditched. Brother and sister Flynne and Burton Fisher (Chloë Grace and Jack Reynor) live with their ailing mother in a rural South Carolina town of the 2030s. He’s the veteran of a war against rebel Texans, where he was connected to the rest of his platoon by cybernetic implants called ‘haptics’. He now earns a living playing immersive virtual reality games, although Flynne is better at it than he is. So far, so Gibsony. But when a fancy headset arrives from a mysterious outfit wanting them to test-drive a new game, Flynne finds herself embroiled in adventures in a still-more-futuristic London of the 2070s. This, she soon realises, is not virtual reality at all, but real reality, the future Londoners having worked out a way to tap into her timeline and link her mind to a ‘peripheral’ - a lifelike cybernetic version of her which can act in their world.

Or have they? The London of the 2070s seems an unlikely place: rebuilt after an apocalyptic event, it looks very much like the London of today except for some skyscraper-dwarfing classical statues which double as atmospheric cleaners (or something). These future-future bits of Gibson’s novel have been heavily simplified to make it telly-shaped, and the result is something that feels a bit YA. In the real world, and in dense novels like The Peripheral which attempt to suggest real worlds, power is more opaque and more widely distributed, but films, TV, and books for younger readers don’t have space for overlapping faceless bureaucracies and competing interest groups. When I turned Mortal Engines from a 120,000 word SF novel into a 60,000 word children’s book, the first change I made was to turn the government of London from a complex web of rival council committees and sub-committees into four easily distinguished  Guilds. That vastly improved Mortal Engines, but I’m not sure such simplification suits The Peripheral. The future London of the TV version seems to be controlled by three powers: Russian oligarchs, the Metropolitan Police (even more inclined to overreach that its current incarnation) and an outfit called the Research Institute who I don’t recall featuring in the book at all. Their sinister CEO does her own dirty work, offing unsatisfactory underlings with killer bees. It all feels a bit unlikely; a bit thin, and I spent the whole series expecting a final-act rug-pull where it turns out that it is all a simulation after all. But no. (Unless they’re saving that twist for Season Two?)

Not to worry though: future London looks cool (how did they afford to shoot in so many central locations?). And not-quite-so future Carolina is well-realised too - pretty much the present day but with more 3D printers, electric bikes, and haptically-linked combat veterans. Flynne and her brother make for likeable protagonists - the sort of people who are usually portrayed as redneck buffoons in U.S. dramas, but here are mostly smart, kindly, and capable. The scene where Burton and his ex-army friends turn the tables on a squad of futuristically-equipped assassins is very satisfying.

There are redneck buffoons, of course, and most of them are in the employ of the crime boss who runs the Fishers’ town. This is quite a major subplot, massively inflated from the novel, but it doesn’t really lead anywhere much and feels as if it’s been expanded mainly to allow for plenty of shootings, stabbings, etc. For The Peripheral is a very violent show: rather gratuitously so at times. When Flynne’s enemies in the future arrange for a hitman to murder her, he takes time out first to do a messy massacre in a bowling alley for … no reason at all, as far as I could see. Maybe it was to heighten the tension by showing us he’s a real hard nut, but he is a hit man, I’d have taken his word for it. The oligarch who’s arranging Flynne’s visits to the future, on the other hand, is charming, and barely ever so much as raises his voice, but is clearly absolutely lethal: he’s played by JJ Field who, like a lot of the actors in this show, seems to be having enormous fun.

And it is enormous fun, if you don’t mind all the aggravated homicide. Whether it’s any more than that, I’m not sure. It seems to me that it’s one of those things that’s always gearing up to explore Big Themes, but then just delivers another fight, another sleek action sequence. The Big Theme it’s most interested in is the one that echoes through most modern sci-fi, just as space travel echoed through the sci-fi of the 20th Century. It’s the notion of the self as a sort of software which might be downloadable into other bodies, and of bodies themselves as replaceable vessels, to be modified or discarded at will. It’s an idea which went mainstream with The Matrix at the turn of the century, and it’s everywhere now. It’s not hard to see why our self-obsessed, gamified, very online society would create fiction about piloting cloned or cybernetic avatars. But when all the avatars seem to do is fight, it soon starts to feel a bit stale. Still, I’d be happy enough to watch a second series of The Peripheral before I make my mind up