I try to keep reasonably up to date with my film reviews on here, but I’m afraid this one comes a bit late - Death Race 2000 was released in 1975. I remember kids at school talking about it when it came out (though I hope they hadn’t seen it, since it’s X-Certificate stuff and these were nine-year-olds) - so when it showed up on Amazon Prime I thought it was high time I found out what all the playground fuss had been about. 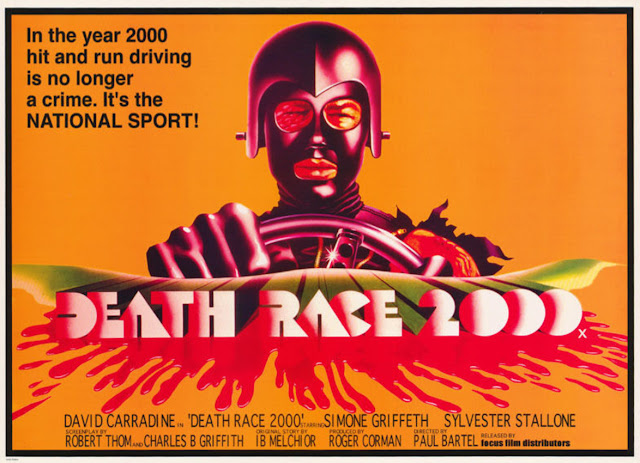 Death Race… came from Roger Corman’s stable of exploitation movies, and was shamelessly designed to cash in on the pre-publicity for Rollerball, another, rather more expensive, lethal-future-sport film. Based on a short story by I. B. Melchior, it plays like a sex-and-gore fuelled episode of Wacky Races, but I suspect modern viewers are more likely to compare it to The Hunger Games. Like The Hunger Games, it takes place in a future fascist USA where the authorities control the populace bread-and-circuses style by staging gladiatorial contests. In Death Race… of course, these contests take the form of transcontinental motor races, in which the drivers are allowed to use any means necessary to get ahead of their rivals, and gain points for running over pedestrians (extra for small children and OAPs.)  Unlike The Hunger Games, it wraps the whole thing up in a brisk eighty minutes.

Which still feels slightly too long, to be honest. This is a cheap movie, and most of what budget it had seems to have gone on cars and explosives, leaving the action looking a bit thin and over-stretched. (Perhaps it’s to save money in costumes that all the actresses involved have to do at least one scene in the nip?) The main title card seems to have been drawn in felt tip by a moderately talented tween. The blood, which sprays everywhere when a driver makes a ‘score’, looks like red paint. Few of the performances are much to write home about either, although that’s probably no fault of the actors, working against the clock, in bad weather, with ridiculous dialogue. The racers all have wrestling-style personas: Mary Woronov is a cowgirl,  a pre-Rocky Sylvester Stallone is a gangster, and Roberta Collins plays an actual Nazi, ‘Mathilda the Hun’, with a swastika on her helmet and a car dressed up like a doodlebug. There’s not much characterisation beyond that, although David Carradine is effective as black-masked anti-hero Frankenstein, a driver who has been in so many crashes he’s has half his body replaced with transplants and prosthetic bits and pieces, and who may or may not be sympathetic to the rebellion.

But there’s a nice streak of black comedy running through it all, from the chirpy TV commentators reporting the latest body count, to the rebels who keep trying to stop the race with exploding plastic babies and Wile.E Coyote - type ‘DETOUR’ signs. (At one point they even lure a racer into a fake tunnel leading over a precipice.) The government, meanwhile, denies the existence of any rebels and blames the sabotage on the French, ‘who also destroyed our telephone system’. Director Paul Bartel apparently shot a lot more comedy which Roger Corman cut out before release - a shame, as that’s the aspect of the film which has aged best.

Otherwise, it’s chiefly of interest for the influence it had. I doubt The Hunger Games was actually inspired by it (future gladiators is a pretty standard idea after all), but I’m pretty sure the punkish road warriors of Mad Max were, and I reckon the writers of British sci-fi comic 2000AD were watching - I’m no comics expert, but the combo of violent action, satire, and goofy black comedy reminds me a lot of the old Judge Dredd strips. And of course those things fed into lots of others further downstream, probably including Mortal Engines. Death Race 2000 is definitely what I thought science fiction was back in those distant, pre-Star Wars days - violent, cynical, pessimistic, and definitely not for me. Nowadays, I can watch it with a warm glow of nostalgia.