Egg and the River Girl 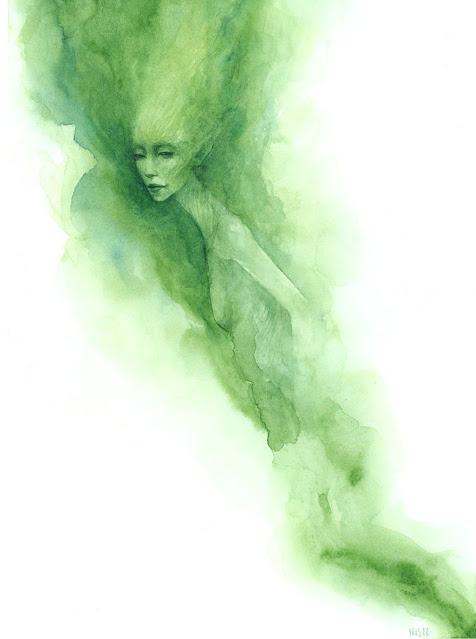 Utterly Dark and the Heart of the Wild is one of my spookiest efforts, so here for Hallowe'en is a little excerpt, featuring one of the supernatural denizens of the Vale of Barrowchurch.
I’ve borrowed two pictures to illustrate it. The green lady above is by the brilliant Iris Compiet, from her book Faeries of the Faultlines, which features a host of eerie and unsettling beings. The one below is one of Brian Froud’s paintings from his 1979 book Faeries, with Alan Lee, which partly inspired the river girl and much else in Utterly’s world.
In the story, Utterly and her Uncle Will are visiting Barrowchurch as guests of his cousin Francis. Utterly's friend Egg has gone with them, and is posing as their servant...

Egg had been exploring too, although he had no guide except his own curiosity. It had led him first to the kitchen garden, and then into the large fruit-cages there, where he ate a large number of ripe strawberries and raspberries before a gardener saw him there and came running to give him a good hiding. The man shouted loudly enough, but he was old and slow, and Egg outpaced him easily. Still, he reasoned it might be wise not to hang around the Grange until the hue and cry had died down, so he took himself through a hedge or two and across several fields until he came to the river.

He knew this was the river Swayle, which flowed down to meet the sea at Summertide Town. It was much narrower and more winding in this inland stretch, but just as slow, flowing sluggishly through deep pools overhung with alder and grey willow. Egg made his way through the nettles and cow-parsley which grew in profusion on the bank, until he reached the same footbridge that Utterly had crossed earlier. He stood in the middle of the bridge to eat the strawberries he had crammed his pockets with before the gardener found him. As he ate, he looked down disapprovingly at the water, and the curtains of green weed which swirled and stretched themselves beneath the surface. He was used to the quick, bright, lively streams of Wildsea, and he did not like this lazy, sinister-looking river.

He was right not to. After he been standing there for a few minutes he noticed an eye looking up at him through a gap in the weed. As soon as he saw it, it went away again, but Egg felt it was still watching. He fetched out a strawberry that had not got too squashed, and tossed it into the river a few yards upstream from the bridge. It floated there for a moment. Then there was a sudden swirl in the water and the strawberry vanished. Anyone who had not been paying close attention would have thought a fish had taken it, but Egg had been watching intently, and he knew it had been snatched by a green hand.
“Magic,” he said to himself, disgustedly. “I thought this place felt lousy with it.” Aloud, he said, “I know your game.”

There was a splash behind him. A girl was standing in mid-stream below the bridge, just her head and shoulders poking out of the water there. Her long hair was the same sickly green as the weed which swirled around her. Her skin was green too. She smiled unconvincingly at Egg, and he saw that even her teeth were green, like unripe acorns.
“Come swim with me, boy,” she said, holding out a bony hand.
“And get drownded?” said Egg. “Not likely.”
The green girl scowled. “You’re no fun. I will show you where an otter nests.”
That sounded interesting. “Go on then,” said Egg. “I’ll walk along the bank. You lead the way.”

“That isn’t how it works. You need to come in and I pull you under and then you stay down here for always, and the little fishes nibble your nice bones clean and white.”

Egg shook his head and threw her another strawberry, but she ignored it and let the slow current carry it past her.

“I could bring you some cake if you like,” he said. “What’s your name, anyway?”

“I do not have a name,” the girl said scornfully. She ducked back beneath the water and Egg caught a glimpse of her long green legs as she turned and kicked herself deeper. The floating strawberry vanished with a plop. Then she was gone, and the river flowed on its way in silence, even more sinister than before.

The river girl turns out to be among the least of Egg and Utterly's worries, since Barrowchurch is well-with spooky stone circles, and sinister vicars, and boasts a portal into a world of wild and ancient woods ruled by the terrifying figure of the Hunter. Find out more in Utterly Dark and the Heart of the Wild, published in the UK by David Fickling Books.