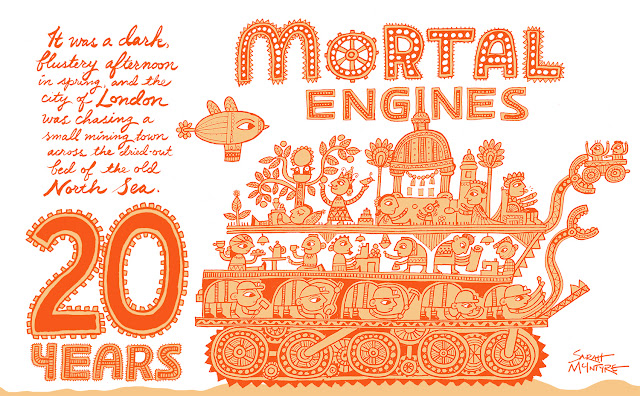 Mortal Engines is twenty years old today - it was published on 16th November 2001. Above is some celebratory artwork Sarah McIntyre has done for the occasion. And publisher Scholastic are marking it with new editions of the whole quartet featuring a snazzy silver anniversary roundel (but retaining Ian McQue’s cover art, which is one of the best things that’s happened to the series. 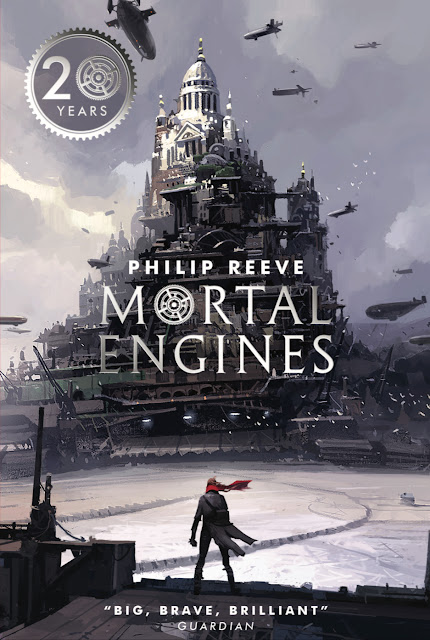 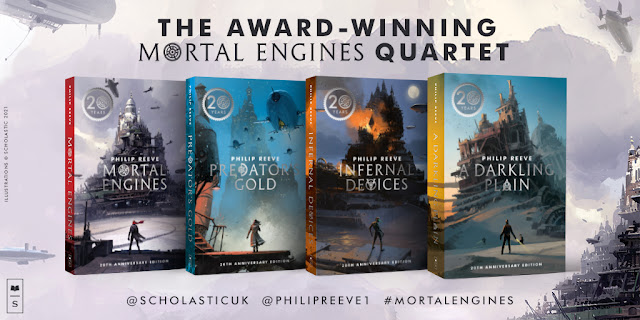 I don’t talk about Mortal Engines much these days because it was so long ago. (I started working on various early iterations of it sometime in ‘91 or ‘92, so this is mor like the thirtieth anniversary for me - at that time I never really imagined it would get published, let alone that people would still be reading it in 2021.)

Looking through it a few years ago I was struck by how much of a spoof Mortal Engines is - I’d forgotten that it really started out as a kind of parody of action/adventure stories. Sustaining that over 300 pages (more like 700 pages in the early versions) meant that the characters had to start taking it seriously, but there’s still a lot of things in it that are basically jokes. From time to time someone online will stumble across the book or film for the first time and go, ‘This is a ludicrous idea! Moving cities couldn’t possibly work! Are we supposed to take this seriously?’ To which the answers are, ‘I know’, and, ‘I know’, and ‘not really’. (‘Not really’ is also the answer to everyone who mistakes it for some heartfelt metaphor about the environment or Capitalism.)

It has its moments of seriousness though, and even tragedy, which is an odd and perhaps an amateurish mix, but then I was an amateur when I wrote it, and I think it works. Readers seem to respond to Hester, which I’m pleased about, and to Shrike, which surprised me as he started out as just a walking plot device and I was toying with cutting him out for being too sci-fi all the way to the final draft. The sequels really just came about because I wanted to explore those two characters in more depth, but of course hundreds of other characters had to be invented to support them and populate the ever-expanding World of Mortal Engines, and that’s how I ended up with a quartet on my hands.

When I was writing the first book I had no thought of sequels at all. If I had, I dare say I would have kept Valentine and Katherine around and saved some of the big stuff that happens at the end for the end of book three or four. But I’m glad I didn’t: burning my bridges like that in Mortal Engines forced me to take the story off in different directions and invent a lot of things that would never have occurred to me if I’d been able to stick to a more conventional series structure.

These days, I hardly ever think about Mortal Engines. It used to be a vehicle into which I could cram all my interests and obsessions, but it’s been twenty years now, and my interests and obsessions aren’t the same as they were: Utterly Dark and the Face of the Deep feels much more me now. But last year I spent some time drawing these little Traction Town bookplates. They started as a bit of a chore, but quickly became fun, and reminded me that fast-moving cannibal towns are still funny and cool… which is pretty much the combo that made me keep writing and rewriting Mortal Engines all through the ‘nineties. 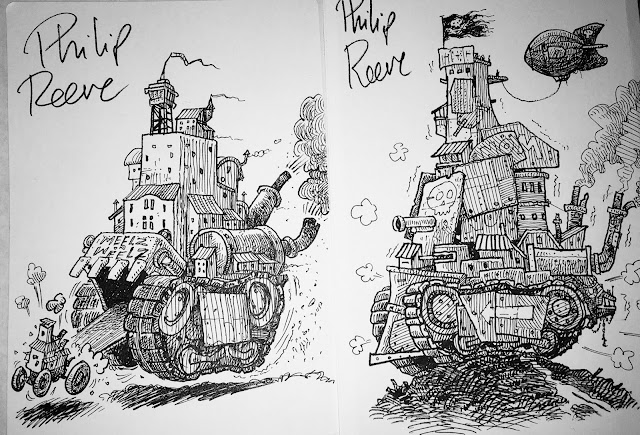 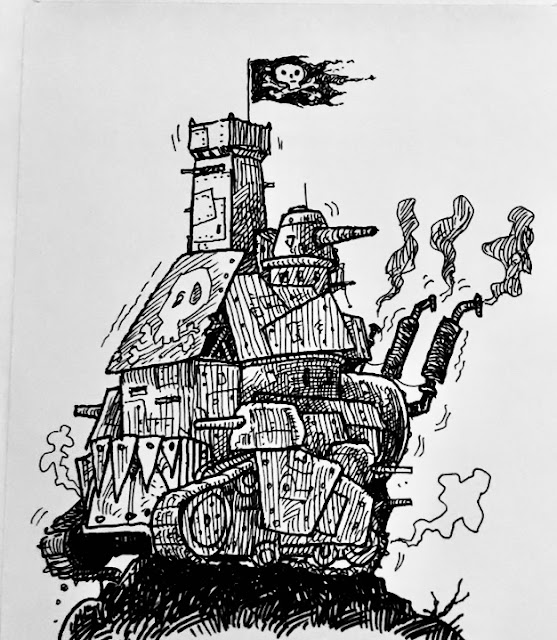 If you’re one of the people who has read Mortal Engines during the past two decades, thank you!