The Kid Who Would Be King

The Kid Who Would Be King is a 2019 film from writer-director Joe Cornish which imagines 21st Century school kids taking on the mantle of Arthur and his knights. Any synopsis will make it sound like a rather generic children’s story, and I suppose that’s because it is, but for the most part it’s a likeable one and bounces along pretty entertainingly.

Alex (Louis George Serkis) is our Once and Future Tween. He finds Excalibur embedded in a lump of concrete in a building site like enchanted rebar and, having pulled it out, is contacted by an eccentric teen Merlin (Angus Imrie) who explains that the ancient evil once harnessed by the sorceress Morgana is on the rise again because the world is so divided and conflict-ridden. (I must confess, I had some trouble with this - is the world really more divided and conflict-ridden than it was in the Cold War? Or the 1930s? Or 1914? Where was Morgana in 1939? Loafing about in her cave I suppose… I do wonder about the wisdom of constantly telling children they live in a terrible time and a terrible country. I know it’s meant to turn them into eager little activists who will Do Something About It, but I think it’s just as likely to produce a generation of anxious nihilists.) Anyway, it’s not really the point of the film, just a spark-plug to get the plot chugging along. Alex is the boy destined to wield Excalibur and heal these undefined divisions, but due to a mix-up he has only four days to prepare rather than the four years Merlin had planned on. Pretty soon Morgana is breaking free of the cavern where she’s been imprisoned and her fiery undead knights are bursting out of the earth to give Alex and his friends a hard time. There follows a quest to Tintagel and then Glastonbury before the final showdown with the forces of evil.

To an adult viewer this is all pretty predictable, but TKWWBK is squarely aimed at children, so it may be the first time they’ve seen some of these fairly well-worn clichés. (The film starts with an animated gallop through a doctored version of the Arthurian legend to get them up to speed.) It’s very exposition-heavy, and it did sag a bit in the middle, but there are some nice gags, and the London estate where the kids live is nicely humdrum, without any of that creepy John Lewis Christmas advert/Potemkin village vision of London that you get in the Paddington films. (Maybe the houses are a bit too spacious, but it’s hard to make films in tiny rooms.)

When the story moves west it more or less maintains that link with reality - there are some evocative Bodmin Moor landscapes which I think are filmed on the actual Bodmin Moor, and sequences shot on location at Tintagel and Glastonbury, two of the eternal landmarks of the legend. (Glastonbury looks a bit photoshopped, and an unlikely forest has appeared on the cliffs near Boscastle, but compared to the usual Hollywood treatment of UK geography this is basically cinema verité). 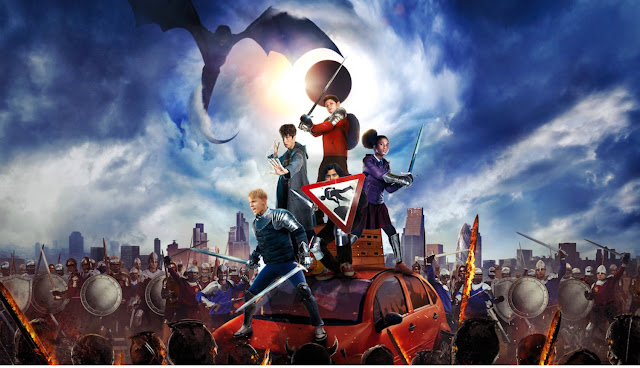 Inevitably, it all ends up back in London, with the kids defending their school against Morgana’s legions. Visually this is where the film is at its wittiest - the blue and maroon uniforms with the school crest on the breast look like knights’ surcoats, the school becomes a castle, chairs and bits of gym equipment are repurposed as mediaeval weapons, shields are made from road signs, and it’s all quite a lot of fun. But TKWWBK also has an actual emotional core: unlike most of the Arthurian films I’ve watched, this one believes in the idea of chivalry and a code of knighthood. When Arthur realises that his quest has failed because he’s fallen short of those ideals, he experiences a moment of shame that the Gawain poet would have understood.

That largely works because Louis George Serkis is a good little actor, and endearingly earnest. The other children are all fine too. Angus Imrie as Merlin will divide opinion, I think - I found him funny and energetic, but I could equally see how he could just be annoying. He ages backwards like TH White’s Merlin, and occasionally appears in his older (younger?) guise, played by Excalibur’s Patrick Stewart, who I think is the first actor to appear in two of my Arthurian Films. 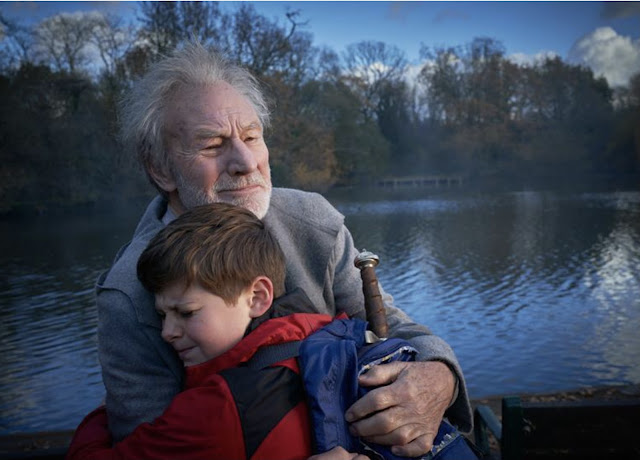 Rebecca Ferguson is a suitably sinister Morgana, but she has an unfortunate habit of turning into a CGI dragon thingy at dramatic moments. Jude Law had a similar problem in King Arthur: Legend of the Sword, and it’s something that mars a lot of fantasy films - good actors work their socks off to give a bit of charisma and nuance to the villains, and then in their climactic confrontation with the hero they’re replaced by a weightless, presenceless patch of pixels with which we have no connection at all. Also, I’m not keen on having actual monsters in Arthurian films. They’re all well and good in Greek myths or The Lord of the Rings, but the magic and otherworldliness in Arthur should be subtler, I feel, and his antagonists human. Indeed, the whole idea of turning the Arthur story into a conflict between good and evil feels slightly wrong: the Big Bad which the Round Table is founded to combat is the human propensity for greed and war, not some supernatural entity. Still, Morgana’s revenant knights look pretty cool as they ride their fiery steeds out of the ground and go galloping through the streets of South London, trailing smoke and sparks, and I suppose, in a film like this, that’s the main thing.

For all its entertainment value, I don’t think The Kid Who Would Be King did very well at the box office, which is a shame; it deserved to find a bigger audience, and if this blog sends a few new viewers in its direction I’ll be glad. Fantasy-loving children who can cope with the scary bits in Dr Who or The Lord of the Rings will like it, and adults watching it with them will find stuff to enjoy too. Its commercial failure suggests that Arthur can’t compete with the lumbering franchises which dominate fantasy cinema now - all those wisecracking superheroes and endless remakes of Star Wars. But Arthur was ruling his own Extended Universe for hundreds of years before before they came along to borrow his schtick, and he’ll be there when they’ve gone. The image of the boy drawing the sword from the stone recurs again and again in these films and TV programmes, and whether it takes place in a forest glade or a building site, animated or live action, watched by thousands of extras or done on the cheap in a blacked out TV studio, it never loses its uncanny power. 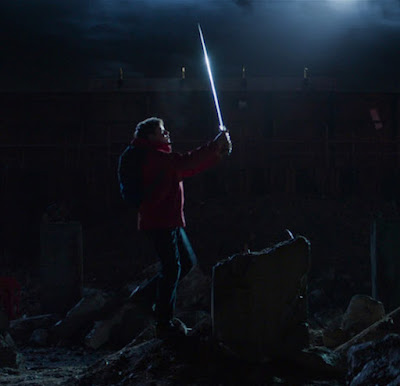