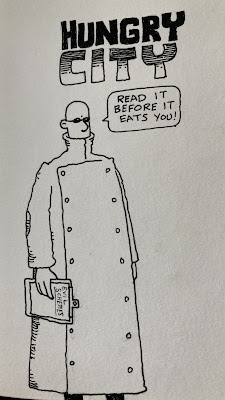 I got thinking in the night about the early versions of Mortal Engines. I don’t have them any more - they filled an ever-growing stack of notebooks all through the ‘90s and you can’t hang on to that stuff forever - I just keep a few scraps, which I’m reproducing here. So I’m quite vague on a lot of the details now. I remember the world was quite different from the world I eventually ended up with, but I can’t recall how the story worked (or didn’t work) within that.

It was called Urbivore or Hungry City in those days, and the most obvious differences were that it wasn’t set in the future and London never crossed the North Sea (which was still a sea, so how could it?). Every version started with some variant in the same first line - it was a nice day and London was chasing a small town of some sort. 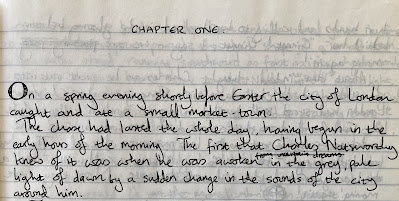 The setting was a sort of parallel world where Traction Cities had arisen fairly early in the industrial revolution. I can’t remember if it was set in Victorian times, or in a present day that was still essentially Victorian in dress and manners - possibly both, in different drafts. I’d been reading a lot of Dickens around the time I started writing, and was aiming to write a SF novel that was Dickensian in mood and scale. I remember wandering round the cemetery in Brighton one nice afternoon, collecting useful character names from the gravestones…

When I started sending it out to agents, the very few who bothered replying didn’t get the retro-future stuff at all, which is interesting when you consider how popular steampunk was to become just a few years later. ‘Tomorrow belongs to those who can hear it coming’ all right, but only if those who can hear it coming also have the self-confidence to convince other people it actually is Tomorrow they can hear and not just some random bee buzzing in their bonnet.

The reason London never began it’s foreign travels was because it didn’t need to. It seemed to me when I started writing that a massive moving city would probably have a top speed of about fifteen MPH, so it could happily spend a few centuries lumbering around the mainland UK. Much more of the story took place on London in those days. It was really an attempt to describe every bit of the city, so I had characters living on each different level - there was an old librarian called Polwhele who I suppose was a precursor of the Historians in the published book, and a boarding house full of oddballs in a lower tier street called Dogstar Court where Hester Shaugh took lodgings when she came aboard the city looking for revenge. Up on the top deck the Lord Mayor, his rival Chudleigh Pomeroy, and various other bigwigs debated the possibility of constructing a Channel Bridge so London could go and dine on the great Traction Cities of Europe. Meanwhile, the explorer Valentine was off doing something very important in America (which was full of Traction Cities of its own, New York, Chicago etc). There was a woman called Kathleen Beecroft with whom Valentine was in love - she had some important role in the city but I can’t remember what. The Lord Mayor died at some point, so there was a grand funeral service in St Paul’s, where a contraption called the Mechanical Catafalque lowered the coffin down the whole height of the city into the flames of the central furnace. There was a lost super weapon which acted as a McGuffin, but it wasn’t MEDUSA, and I don’t remember how it fitted in. There was a fearsome modern city called Irontown that was angling to eat London - it was smaller, but faster and better armed. And somehow a young man called Charles or sometimes Stephen Natsworthy stumbled on the truth about Valentine having murdered Hester’s family, and the fall of the great man paralleled the fall of London, which ended up destroyed, of course. 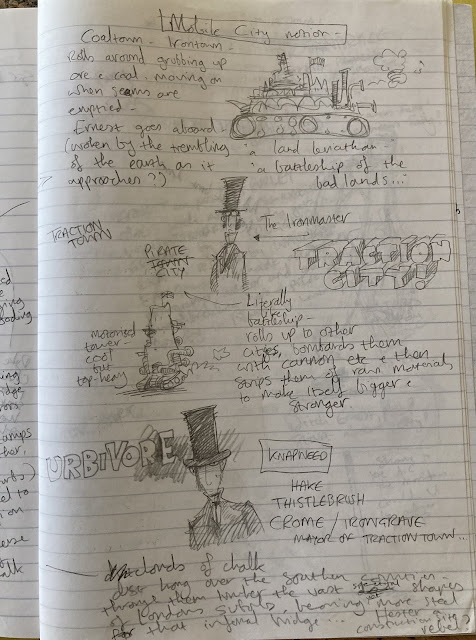 But no agents bit, and then Philip Pullman’s His Dark Materials books started coming out, so the parallel world stuff started to feel old hat, and eventually I decided to rewrite my epic as a children’s book, since I was working as a children’s illustrator by that time and could circumvent agents and go straight to children’s editors. Liz Cross at Scholastic liked the basic idea, so I walked up onto the common at Snap Corner one sunny afternoon and sat there with a notebook doodling costume designs and working out how to break and rebuild the story. 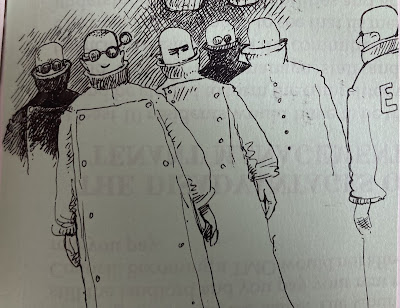 It still took a lot of drafts to reach its final form, but most of the big decisions were made that afternoon. It was going to be set in the post-post-post-apocalyptic far future. It retained a vaguely Victorian social structure, but all manner of high technology became available if I needed it, and a pantheon of made-up gods replaced Christianity as London’s state religion. More radically, the North Sea dried up, allowing London to range across the whole of Europe. In the first versions the West Country had been the stronghold of Anti-Tractionism, cut of from the rest of Britain by a massive earthwork called Winterbourne’s Dyke which stretched from Weymouth to the Bristol Channel. In the new version, the Anti-Tractionists lived in mountainous regions all over the world, and Winterbourne’s Dyke became the Great Wall at Batmunkh Gompa. Gradually characters like Polwhele vanished, and others like Pomeroy found new roles. I simplified London’s complicated politics by sorting everyone into four different Guilds, only two of which (Engineers and Historians) ever had much bearing in the story. Charles/Stephen Natsworthy became Tom. Someone called Angie Pod turned into Bevis Pod, but I can’t now recall who Angie was… 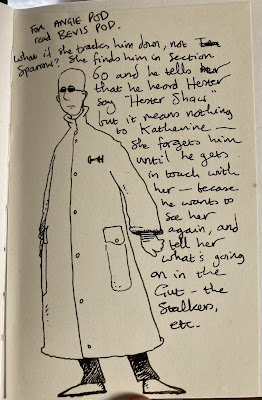 Valentine lost his lover Kathleen, but acquired a daughter, Katherine. America was obliterated, which probably obliterated my American sales too, but it simplified the story further. And London and the other cities got much, much faster - I felt I’d left plausibility so far behind already that there was no point keeping the story moving at walking pace. From now on, Traction Cities and pirate suburbs could race about like dune buggies when they needed to, obeying only the logic of dreams. Hit the ground running was going to be my motto while I worked on the final version.

And after that, it was just a matter of writing the thing. Again. 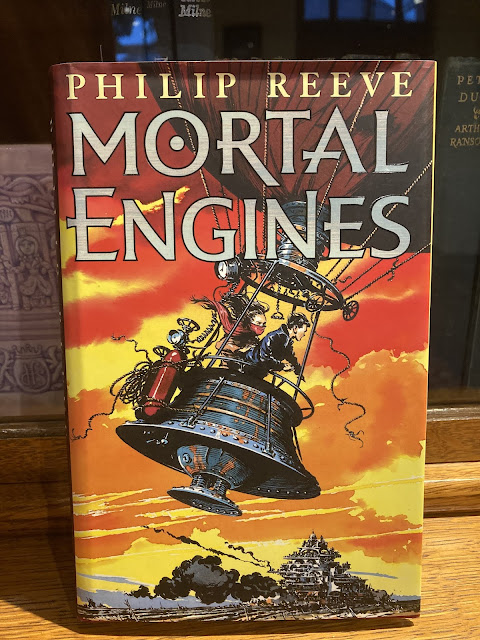