With this blog currently mostly concerned with Arthurian Cinema for some reason, I thought I should do a post about my own contribution to the legends, my 2007 novel Here Lies Arthur.

I thought of this book around the same time I started work on Mortal Engines, and started writing it pretty much the moment I finished A Darkling Plain. My thinking was that, having written so much about the future, it would be nice to write about the past for a change. Actually it wasn't as radical a change as I'd imagined - post-Roman Britain, with its grubby inhabitants living among the ruins of a lost civilization, felt just as post-apocalyptic as the Traction Era.

The background is largely based on I stuff I read back in the 'eighties when Arthur was my big obsession. It's set at some unspecified point in the late 5th Century, when the former Roman province of Britannia is facing raids by Irish, Pictish, and Saxon invaders, while local warlords carve out their own little territories from its carcass. This is very much the scenario which forms the background to some of Rosemary Sutcliff's books and to Arthur of the Britons. Recent historians have cast some doubt on it, suggesting that the takeover of lowland Britain by the Saxons was a longer, slower, and more peaceful process. I don't really care though - all stories about Arthur are fantasies, however much some may claim to be realistic, and I simply chose a broadly plausible scenario that suited the needs of my book.

There have been plenty of books before which showed Arthur as a Dark Age war leader rather than a king. Most of them make him out to be a pretty special one, though. In Here Lies Arthur I've imagined him as no better or worse than dozens of other 5th Century tough nuts; he's a gangster, basically, extorting taxes from a territory in South West Britain with the aid of his band of warriors, and rubbing out any British or Saxon rivals who get in his way. The only reason he's remembered at all is that he has in his retinue a bard named Myrddin who acts as his spin doctor, spreading stories that make Arthur sound much bigger and better than he really is.

The presence of a spin doctor really dates the conception of this book to the mid 1990s, when such figures were much in the news: it was seen as rather troubling that Tony Blair or Bill Clinton should have these Machiavellian characters on their staff, managing and massaging the news to show them in a better light. In our present era, when politicians have learned they can just straight-out lie, spin doctors have joined blacksmiths, lamplighters, and video rental shop assistants on the list of Quaint Bygone Trades of Yesteryear. But the idea of Merlin (or Myrddin) being one was what got me excited about the book, because it meant that I could have my cake and eat it - I could present Arthur as a real figure operating in an un-magical world and still make reference to all the things that make Arthurian stories worth telling - the Grail, the Lady of the Lake, the Round Table etc, all of which appear in the story as acts of political theatre orchestrated by Myrddin.

As so often happens, though, it needed a further element to get things cooking, and that arrived in the form of the protagonist, Gwyna. She's a young girl whose village has been burned down around her in one of Arthur's turf-wars. When Myrddin stumbles on her and realises she can swim like a fish, he ropes her into playing the Lady of the Lake - lurking underwater and holding a sword up for Arthur to take, impressing his more pagan followers. (While I was writing the book we moved to a house with a biggish pond in the garden, and I spent some fun times kneeling on the bottom of it and waggling a toy sword in the air to work out if this was Actually Possible.)

Gwyna is also the book's narrator. I don't usually write in the first person, as the disadvantages outweigh the advantages, I find. But I wanted my Arthur story to have a blunt, spare, scuffed feel to it, and it seemed to come out better when I let Gwyna tell it for herself. She does a lot of things that I wouldn't as I writer - there are long passages in the present tense, for example - but I reasoned that she wasn't a writer, she was a storyteller, and I was just transcribing the story she was telling around the fire in some damp Cornish hall once Arthur's empire has come tumbling down.

I chose to write about a girl because there are so many stories about young men in that kind of world that I didn't want to tell another. The trouble was,  I couldn't imagine a post-Roman, early Christian warrior elite being an equal opportunities employer, and I needed my heroine to be present at battles and things, not stuck at home doing the cooking. Then I remembered Thomas Berger's novel Little Big Man, about a settler child kidnapped by the Cheyenne who, as an adult, moves to and fro between Cheyenne and white society and sees the Wild West 'as it really was'. That was what gave me the idea that Gwyna would live both as a girl and a boy in this rigidly sexually divided society. Myrddin is too kind-hearted to boot Gwyna out once she's finished Lady-of-the-Lakeing for him, so he keeps her on. Disguised as his servant boy Gwyn, she becomes part of Arthur's growing following, and 'rides with his war-band all up and down the world'.

Little Big Man wasn't the only western that influenced me - I was after the bleakness and iconoclasm of those revisionist seventies films or HBO's Deadwood. Gangster movies too - our old friend the Green Knight, barging into Arthur's hall in a story Myrddin tells, demands to know, 'who's the boss of this gang?'; one of Arthur's rivals is simply called 'the Irishman' because I thought he sounded like a character in a Scorsese film (he is now). I remember trying not to give Arthur any lines I couldn't imagine being spoken by James Gandolfini as Tony Soprano. But for old time's sake I opened and closed the book with an image from Excalibur - riders in a burning wood, and the ship setting off into the west.

So that's my Arthur book. It's published by Scholastic, and available at all good bookshops. For a long time it was my favourite among the things I've written, because it came closest to capturing the feeling I was after, but it's been superseded now by Railhead and Utterly Dark. If I go back to the Arthur story (which I probably will at some point) I wouldn't do it this way. But I think it still stands up.

And of course, if any film makers are reading this, I think it would make a very good mid-budget film... 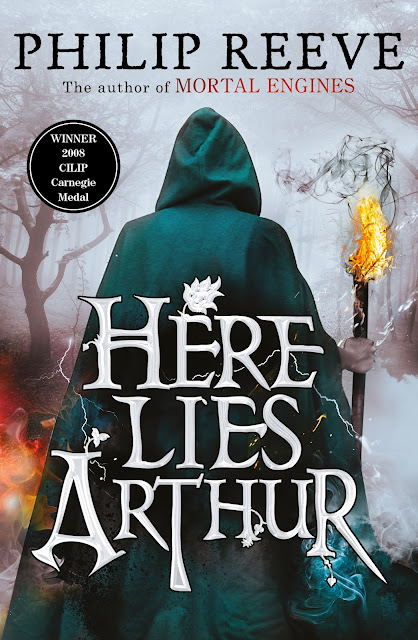