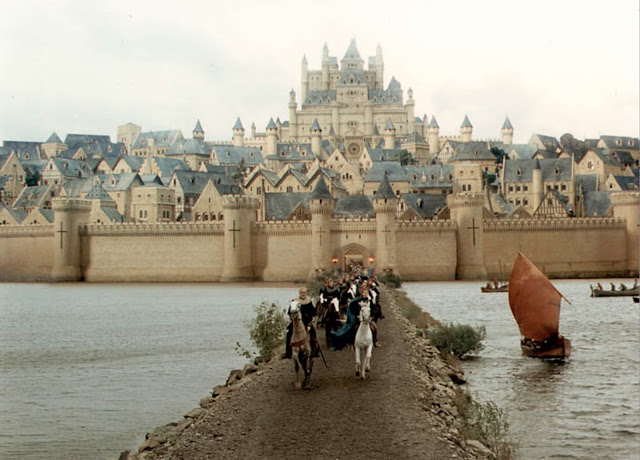 I’ve mentioned this before, but I think I’ve reached the point in my survey of Arthurian Films now where I can identify it as a firm rule - the First Law of King Arthur Films: if you leave out the magic, they turn into Westerns.
It’s a two-way street, of course: the lonely heroes who ride through Hollywood’s ahistorical version of the Wild West are really just knights errant in a new setting. It makes me wonder if anyone has ever gone the whole hog and just made a Western based on Le Morte D’Arthur or Gawain and the Green Knight or something. And if not, why not?
In Jerry Zucker’s 1995 film First Knight the Western element is really quite explicit. Jerry Goldsmith’s lush score sounds like it’s come from a John Ford film, the Knights of the Round Table wear navy blue uniforms and carry yellow pennants like the Seventh Cavalry, and evil Prince Malagant’s riders gallop into town like a gang of outlaws, tossing burning torches into flammable buildings and shooting down hapless bystanders with dinky little crossbows the size of six-guns. Richard Gere’s Lancelot isn’t a knight at the start but an itinerant swordslinger. He even seems to be wearing chaps.

First Knight is not entirely without merit - there are some nice English and Welsh landscapes, and Camelot, a walled city with lovely blue tiled roofs, feels as if it should be twinned with Minas Tirith. (I was sure Alan Lee had been involved in the design on this film, but IMDB says not. It certainly feels influenced by his work.) The production design overall is interesting, with some distinct and rather unusual colour palettes - blues for Camelot, earth tones for Lyonesse, (the baddies get dingy blacks and greys, of course). The costumes are oddly Star Trek-y, but you get used to them, and the fabrics are nice. (John Gielgud has a cameo role, and if you ever feel like doing one of those Twitter threads of ‘John Gielgud as Hotel Cushions’, you’ll find a couple of useful screenshots here.) The knights do look weirdly 19th Century: I don’t think curassiers were a feature of the American Civil War, but if the Union had decided to field a few they would have looked like this, except without the titchy little shields they all wear on their left shoulder for some reason. The castle sets look quite French, but that’s appropriate, since the Arthurian legends are really as much French as British. 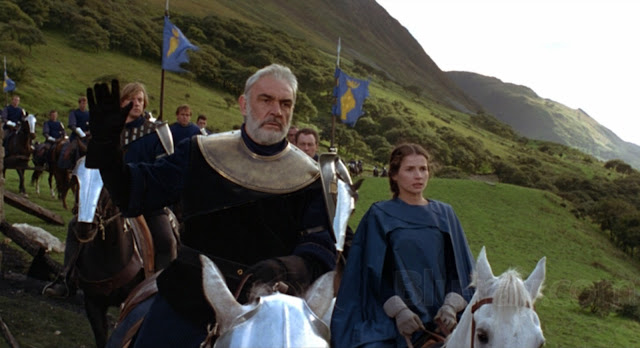 I suspect whoever put up the money for it (and they seem to have put up quite a lot of money) thought they’d be getting a film along the lines of Robin Hood, Prince of Thieves, which had been a big hit a few years earlier. But Robin Hood, for all its silliness, was a lot of fun. First Knight is no fun at all. Worse, it’s ditched all the existing versions of the Arthur-Lancelot-Guinevere story it purports to tell and made up a new one which isn’t as good. 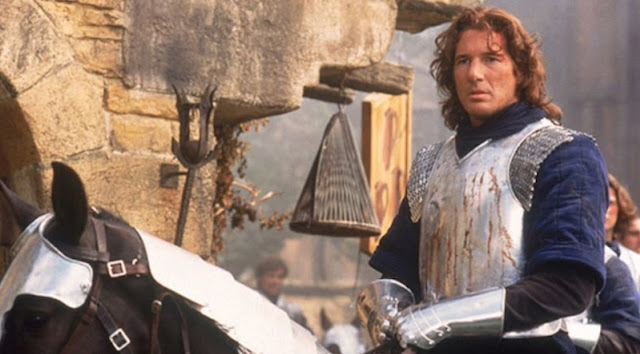 When it begins, Lancelot is travelling around earning a living doing sword fighting demonstrations at country fairs. (I think a recurring problem with later Arthurian films is that film makers are terribly uneasy about having knights and kings as heroes; it’s seen as Problematic in some way, and so they try to make the heroes Everyman instead. Gere’s Lancelot is so modern and American it’s a wonder they don’t just call him Lance. You know they want to.) Julia Ormond’s Guinevere, meanwhile, is a liberated ‘90s woman, first seen playing a boisterous game of foot-golf with her serfs. She’s the ruler of Lyonesse, but the evil Malagant is aiming to annexe her land, so she accepts an offer of marriage from King Arthur (she’s not that liberated). On her way to Camelot she’s ambushed by Malagant’s men, and rescued by Lancelot, who’s basically Han Solo to her Princess Leia. When she finally reaches Arthur she finds he’s played by Sean Connery, insofar as Sean Connery is capable of playing anyone but Sean Connery. (He’s at least thirty years too old too - surely the first job of a mediaeval monarch was to marry and beget an heir, so you wonder what sort of king he is if he’s left it so late.) Lancelot pops up again shortly afterwards, and amazes everyone by outwitting a ridiculous woodpunk fairground attraction which has been set up in the courtyard of Camelot. (It’s like a timber cogwheel-powered version of that tunnel of whirling blades that Sigourney Weaver takes exception to in Galaxy Quest.) This seems to be another rule of Arthurian Films: if they leave out the magic, they end up including things that are just as improbable, so they might as well just have kept the magic in.

Impressed by Lance’s ability to dodge improbable fairground machinery, Arthur decides he might be just the chap to fill an empty seat at the Round Table, and he gives a long speech about what Camelot stands for, delivered in the manner of a man reading his lines off his co-star’s forehead. There’s an attempt here to portray the Round Table as a sort of model democracy (where ‘All serve all’), set against Malagant’s tyranny (‘Men don’t want freedom, they want leadership,’).

Then Arthur marries Guinevere, but she’s promptly kidnapped by Malagant again, this time using a pulley-operated speedboat which I guess was designed by the same genius who came up with the whirling blades attraction. Of course Lancelot rides off to rescue her, and of course on the way home they fall in love.

So Arthur and Guinevere aren’t actually married till mid way through the film, by which time she’s already in love with Lancelot, and Lancelot doesn’t become a knight till after that, which means most of the power of the love triangle is diminished. ‘I trushted you, I loved you, yet you betrayed me,’ Arthur tells Lancelot, after he’s caught him and Guinevere snogging. But the film hasn’t established this at all - he’s barely met the man, there’s no sense of a deep, long-lasting friendship being wrecked, and no sense that it will bring the Round Table down with it. Nor do Lancelot and Guinevere have to endure years and years of yearning for each other before finally succumbing to what Isaac Hayes would call the Pow o’ Luuuuuurve. For centuries this great story has been  reliably tugging at heartstrings, and now William Nicholson (or whichever Hollywood hireling tinkered with screenplay) comes along and breaks it. The only person whose heartstrings are tugged is Arthur, who has a bit of a turn in the chapel. “Why? WHY? WHYYYYY?” he shouts, in the manner of a man reading his lines off a barrel vault ceiling.

Lancelot and Guinevere are put on trial in the courtyard, but before sentence can be pronounced Malagant attacks again, and Arthur is fatally wounded. Lancelot kills Malagant, the other knights see off his men, and Arthur with his dying breath forgives Guinevere and appoints Lancelot his successor. Since Lancelot is the newest arrival at the Round Table and was only an itinerant swordsman till about a week ago you’d think the other knights might have something to say about this, but they all seem fine with it, and gather by the shore to give Arthur a Viking funeral (wait… oh, never mind). So not only is the love triangle fumbled, but Mordred doesn’t exist either, and the implication is that Camelot will endure just fine without Arthur. It’s yet another example of a film which only qualifies as Arthurian because of the names - change those, and it would be a generic fantasy, although even the most generic fantasies can generally muster a monster or two.

So Crikey, really. I try to approach these films with an open mind and look for the good in them, but it’s a bit dismaying to think there are people all around the world who’ve seen First Knight and think this is the story of King Arthur. ‘What’s all the fuss about?’ they must be wondering. It’s actually worse than King Arthur, Legend of the Sword. And that’s not a sentence I ever thought I’d type.