Reeve & McIntyre Big Up Bookshops 8: Halfway Up The Stairs

July 20, 2021
Kevin had enjoyed his week at Little Acorns Bookstore in Derry. With a tummy full of traybake and Biscoffs, he said his goodbyes and took off. He flew south over the border and down the coast. As he flapped over Dublin, Dun Laoghaire, and Black Rock he saw the Irish Riviera was basking in blazing sunshine as usual, and the ice cream shops were doing a rare old trade.

But Kevin wasn’t all that interested in ice cream - it was too cold, and not biscuity enough. He wondered what exciting biscuits would be waiting for him at Halfway Up The Stairs in Greystones?

When he landed outside the shop he found that it wasn’t half way up any stairs at all, it was just on a street, like a normal shop. To his surprise, his friend Cardigan Faun was there, along with all his family. “I’m certainly meeting a lot of people from back home in Bumbleford on this International Bookshop Tour,” said Kevin.

“That’s because this picture of a bookshop was painted by Sarah McIntyre, and we’re the people she likes drawing best,” explained Cardigan Faun.

“Who?” said Kevin. “And what do you mean, picture?”
“This is a picture we’re in,” said Cardigan Faun. “It’s a very nice one, too. It was done in watercolour.”

It was all getting a bit meta for Kevin. “You’ll be telling me next I’m just a picture of a flying pony,” he said. “But I am not, I am an actual real live flying pony, and also a roly-poly one, which is the Best Sort. Anyway, I’m mainly here for the biscuits I mean books.” 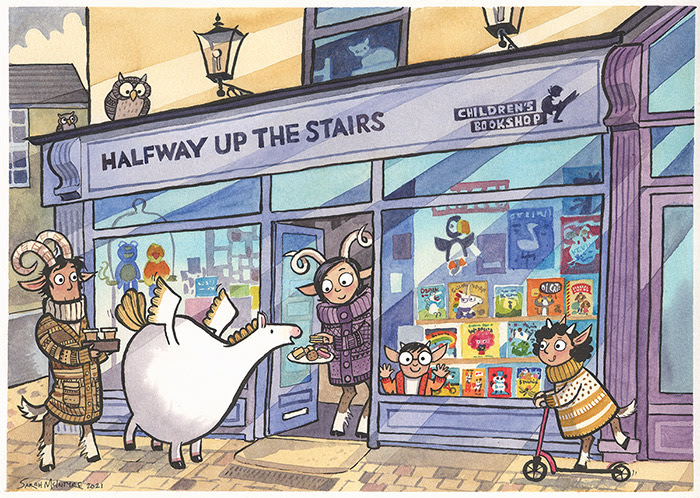 Luckily, just at that moment, the picture of a door popped open and a picture of Mrs Cardigan Faun came out to welcome him with a nice big plate of biscuits.

“Are those just a picture of biscuits?” asked Kevin, suspiciously.

“No, they’re real enough!” laughed Mrs Cardigan Faun. “And when you’ve eaten them, come inside and meet Trish Hennessy - she’ll answer all your booky questions.”

Kevin: What is the best thing about being a bookseller?

Trish: Getting the right books into the hands of children

Kevin: What’s one way you’ve tackled a problem that your bookshop has faced during the pandemic?

Trish:Teaming up with Sarah Webb, we have hosted monthly Children’s Books Salons, bringing authors & illustrators (including Philip Reeve & Sarah McIntyre!) and children’s books experts together in conversations held on Zoom, to an adult audience of children’s book lovers. We also have brought our personal touch to online transactions by providing a personal recommendation service, and handwriting cards for all postal transactions.

Kevin: What are three books you absolutely love hand-selling to customers?

Trish: Diary of Pig series by Emer Stamp; Boot by Shane Hegarty; Here we Are by Oliver Jeffers (and of course The Roly Poly Flying Pony books, and we love Grumpycorn too!!)

Kevin: Who is your favourite children’s book illustrator? (Other than Reeve & McIntyre…)

Kevin: What is your favourite biscuit?

Trish: Plain chocolate digestives. Would you…

Kevin: Ooh! Don’t mind if I do… (TWO HUNDRED PLAIN DIGESTIVES LATER) Do you have a shop pet?

Trish: No. I do have a lab called Simba but he’s a bit nuts so I wouldn’t trust him for a second in the bookshop!

Kevin: What is the best way for people to buy books from you if they can’t visit the shop in person? 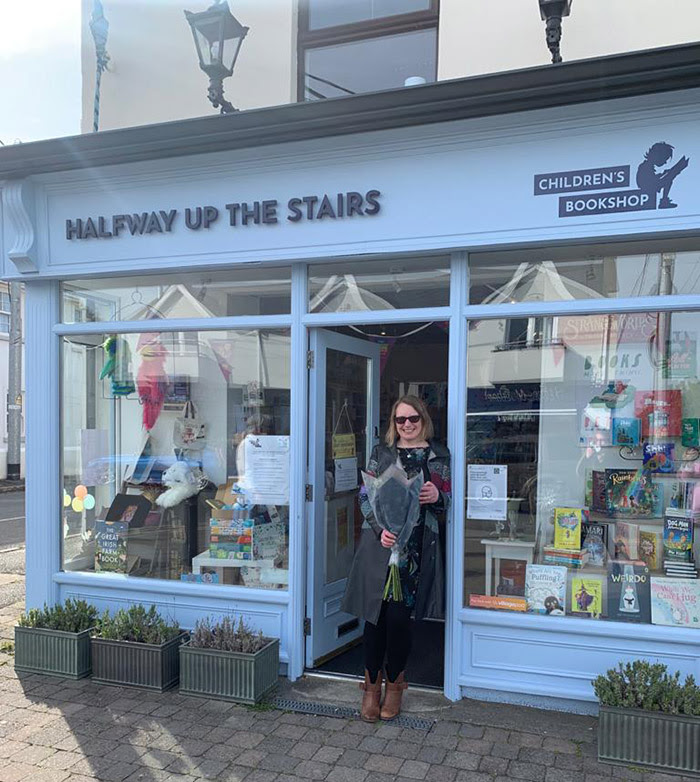 September 06, 2020
In order to save my website it became necessary to destroy it. Before I pulled the plug I rescued the longest post on my old blog. Here it is, like the lone survivor of a shipwreck: my A-Z guide to the ideas behind my novel Railhead. At the time it was written, Railhead had just been published. I'll be putting up some posts about the sequels, Black Light Express and Station Zero , in the coming days. Railhead cover art by Ian McQue A  is for Alternative Forms of Transport ‘What I need,’ I thought, when I’d been struggling on and off for a few years with my space epic (working title, ‘Space Epic’) ‘is an alternative to spaceships…’ I’ve always enjoyed space stories. I first started reading science fiction back in 1977, when the original Star Wars film made me realise that outer space could be just as good a backdrop for fantasy as Tolkien-esque worlds of myth and legend. (Actually, I didn’t see Star Wars until 1978, but its bow-wave of publicity hit these shores the p
1 comment
Read more

November 01, 2020
Walter Tevis was an interesting writer, and an exceptionally good one. I don’t think he’s exactly a household name, but several of his books were turned into movies which are - The Hustler (and it’s sequel The Colour of Money ) and The Man Who Fell To Earth . As a teenage sci-fi afficionado I knew him for the latter, and for a handful of good SF stories. Which must be why, sometime in the eighties I picked up a copy of The Queen’s Gambit. I don’t recall much about it except that it was a real page-turner: a memory of the grotty living room of my student house where I sat up all night reading it came back to me powerfully when I saw that it’s been adapted as a Netflix series. Since The Hustler and The Colour of Money are about the lives of professional pool players there’s an obvious thematic connection to The Queen’s Gambit , which is about a world-class chess player. But it also has a lot in common with The Man Who Fell To Earth , another story about a not-quite-human genius laid l
Post a Comment
Read more