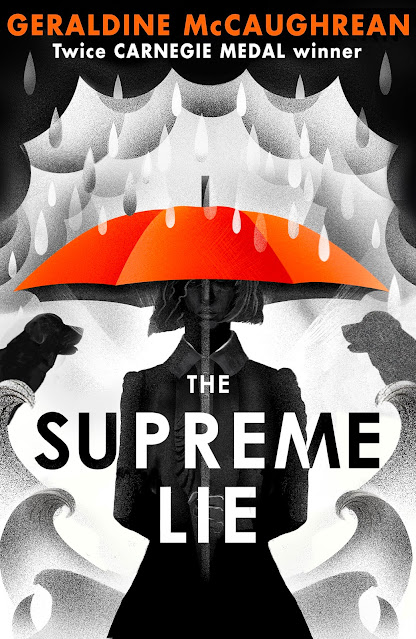 The mind of Geraldine McCaughrean is one of the great natural wonders of our universe. Ever since I first discovered her books in the early 1990s I have been eagerly awaiting each new one, like an astronomer watching for radio bursts from a distant nebula, eager for clues about what’s going on in there.

In her previous novel, the Carnegie Medal winning Where the World Ends, Geraldine restricted herself to a small cast and a single location - not even an island, just a storm-scoured sea stack where her characters were marooned. The Supreme Lie takes the opposite approach, creating a whole imaginary country and cramming it with people and animals.

We are in Afalia, which I visualise as being somewhere in South America (there are snakes, fire ants, and mighty rivers) and somewhere in the Twentieth Century (there are cars, planes, and telephones). The charismatic ruler, Madam Suprema, is somewhere on the Eva Peron/Servalan border, but even she is unable to cope when terrible floods arrive. The disaster wreaks havoc in the countryside and threatens the walled capital, Praesto City, and the fragile Afalian economy (nickel ore in: cutlery out). As La Suprema flees, her abandoned husband, improvising frantically, persuades her 15-year-old maid Gloria to impersonate her.

As often happens in these cases, the impersonator turns out to be a better and kinder ruler than the one she is impersonating. But although Gloria is one of Geraldine McCaughrean’s most sympathetic and engaging heroines, and her story forms the backbone of the novel, she is far from being the only protagonist. The narrative divides like the swollen river, splitting into different channels, rushing off in unexpected directions, and following all sorts of people whose lives have been disrupted by the flood. Several of its heroes are not humans at all, but dogs - loyal mongrel Heinz and dim, adorable golden retriever Daisy. I think this is a new departure for Geraldine, but she knows how dogs work, and their thoughts and feelings are as believable as those of her humans. Their adventures are quite harrowing at times - parts of Heinz's journey, as he seeks his young master Clem through the flooded landscape, read like a doggy Empire of the Sun.

And as you'd expect it's all told in beautiful prose, and packed to the gunwales with inventive metaphors and similes. A dog shaking itself dry looks like a Catherine wheel; the reflection of a bomber as it flies up-river to destroy a dam resembles a huge salmon swimming upstream to spawn. As with all Geraldine McCaughrean novels, The Supreme Lie will need reading at least twice: once in a rush as you’re carried along by the twisting narrative, and again at a more leisurely pace so you can fully appreciate the writing.

The Supreme Lie is published in the UK by Usborne Books and available from all good bookshops. If you have a local independent bookshop I'm sure they'd be glad of your custom, and if you can't get there in person most offer quick mail order services, or have a page on bookshop.org. Here's the page for one of my locals, Crediton Community Bookshop: just type the name of your nearest into the search bar to find their page.

Cover artwork is by Leo Nickolls.