Often when I'm doing events I get asked, 'What was the first thing you wrote?', and I always talk about Spike & Spook, a story about a spaceman and his dog which I remember writing when I was little. As I recalled it, it just went, 'One day Spike and Spook went to the moon, but they met a monster, so they came home again THE END.' But last week my dad was going through some old boxes and he came across the ORIGINAL STORY! It turns out to be a lot more complex than I'd remembered, and part of a whole series - the cover of the notebook bears the proud boast 'Spike and Spook for 5 and a harf pagis'. 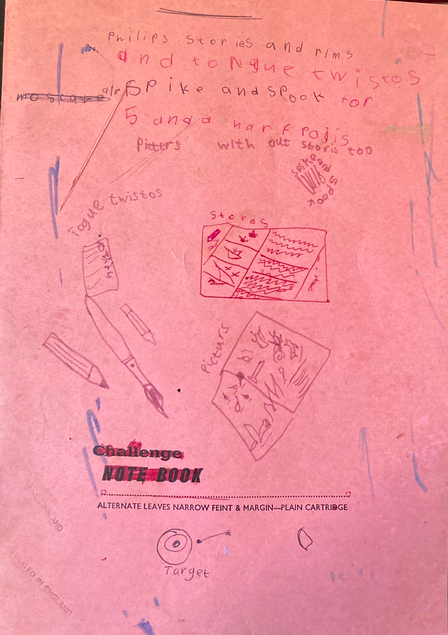 Here's the first story. It's quite hard to decipher, so I've added a slightly corrected version below. 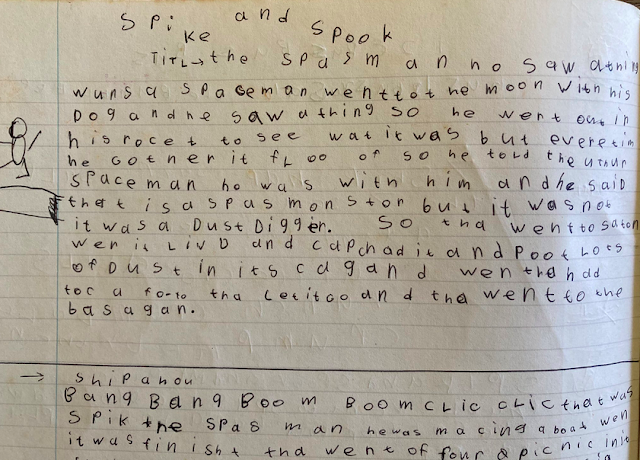 Spike and Spook: The Spaceman Who Saw A Thing

Wuns a spaceman went to the moon with his dog and he saw a thing so he went out in his rocet to see wat it was but everetim he got ner it floo of. So he told the uthur spaceman who was with him and he said 'That is a spas monstor,' but it was not, it was a Dust Digger. So tha went to Saturn wer it livd and capchad it and poot lots of dust in its cage and when tha had toc a fo-to tha let it go and tha went to the base agan.

Here's the illustration: I remember getting upset because I drew the craters as circles and they didn't look right, so my dad showed me how to turn those into rocks by just drawing a shadow beside them, and then we drew some better craters.

I obviously thought there would be a lot of demand for Spike & Spook stories, because I kept on writing them. The second one isn't exactly action packed:

Bang Bang Boom Boom clic clic  that was Spike the spas man he was macing a boat. Wen it was finisht tha went four a picnic in it. Wen tha angcard (anchored) tha ate ham and sosig and for desert ic crem and tha drangc hot tea. 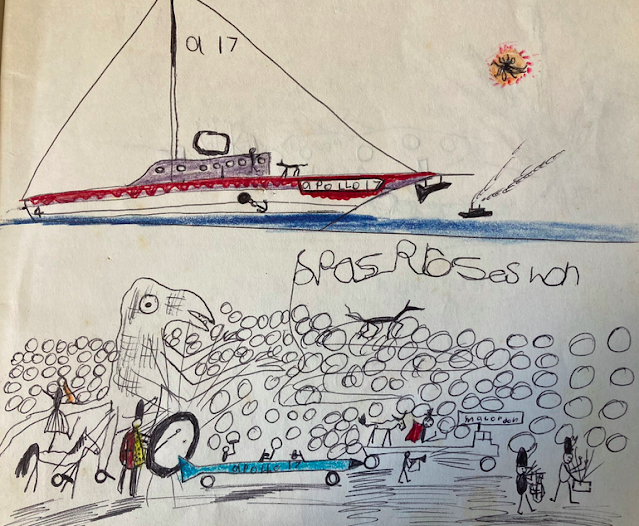 There are lots of references in the illustrations to Apollo 17, so I think the stories must have been written at the end of 1972 or early 1973, when I was six. I'd have been in my second year at primary school (though this is not school work - the stories are something I wrote at home.) In my first year I'd been taught to read and write using a disastrous educational fad called the the Initial Teaching Alphabet, which may explain the Molesworth/Riddley Walker spelling: 'tha' for 'they' might well have been correct in ITA.

The third Spike & Spook story has them back from the moon and taking part in a 'Proseshun', riding in 'a car drest up as a rocet' (see illustration above). I guess I'd seen ticker tape parades for astronauts on the telly. Space was everywhere in those days - Apollo 17 would be the last time a human being travelled beyond low Earth orbit, but I didn't realise that then, and maybe nobody did - I thought astronauts were bouncing about on the Moon all the time.

The fourth story is straight plagiarism - Spike and Spook meet the Clangers, and a 'Soop dragon'. But the fifth is a good 'un, and might be the one I've been misremembering all these years:

Spike and Spook had crash landid in a cav and ther was a fire gost in it so the(y) ran bac to the brocen rocet but the fire gost got in too so they ran bac out of the cav and told the bas(e) and tha poot it out with wartar.

It's my first action scene! It's odd that my earliest stories were sci-fi, and full of 'spas monstors' because I remember being very scared of such stuff as a child, and deliberately steered well clear of Doctor Who and things like it until I was about eleven. But at six I was quite happily throwing Spike & Spook into all sorts of futuristic disasters: there's a story where they splash down in the 'Posific' Ocean 'but the boat had sungc', and then a longer story, divided into chapters, where they crash land on an island, get caught up in a volcanic 'urupshon', and eventually meet a friendly 'ap man'. 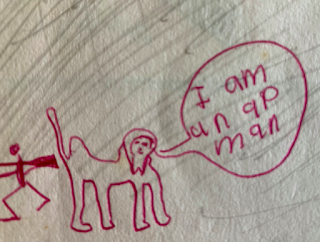 They mad good frinds and livd down the disusd minsharft for a Long Long tim. 1 day a ship cam and got them so that is the end of the stori.

And that seems to be the last I ever wrote about Spike & Spook. There are lots more stories in the pink notebook - I guess I was writing in it off and on for at least a year, and there are 'picters with out storis' too. Superman, the Lone Ranger, Disney's Aristocats, and Puff the Magic Dragon make cameo appearances. So does Abraham Lincoln, but the story in which he 'catchis mesless' and is menaced by '81 littlle baddis' turns out not to be a story after all - so many of my projects still end up this way : ( 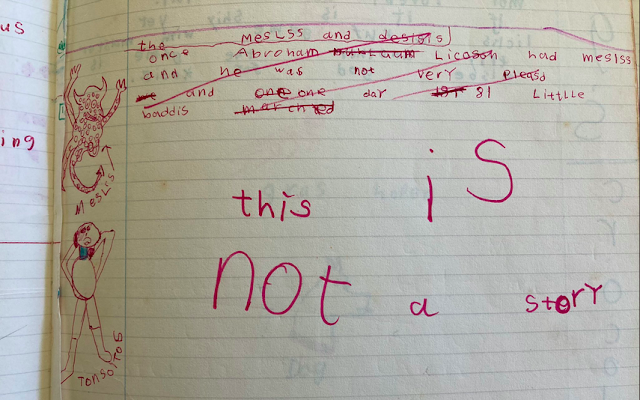 The space craze fades away completely as the book goes on, and is replaced by dinosaurs, then by Napoleonic warfare. I can remember being interested in all those things, but there are a couple of stories whose origins I can't place at all - they must have been inspired by something, and quite possibly copied from books I'd had read to me (Nothing At All ends with a phrase nicked from Rudyard Kipling's Just So Stories) but I like to think they show signs of some sort of literary promise. I've corrected the spellings for these two.

Imagine a house grown over with roses. In this house lived a dancer. She did not dance any longer, because someone had dropped a banana skin on the stage. People took photos and scientists made experiments. One winter when no one was taking photos or experiments she went away, and was never to be seen again.

Everything went well until a boy and a girl came.

'Are there dogs in them?' said a girl voice.

It was not empty, but they did not know that, for of course they could not see Nothing At All, which was his name. And they took Curly and Pointy home, but Nothing At All did not sit down and cry, oh no, he followed them and jumped in his kennel and in time he became visible.

So that was all right, oh best beloved. 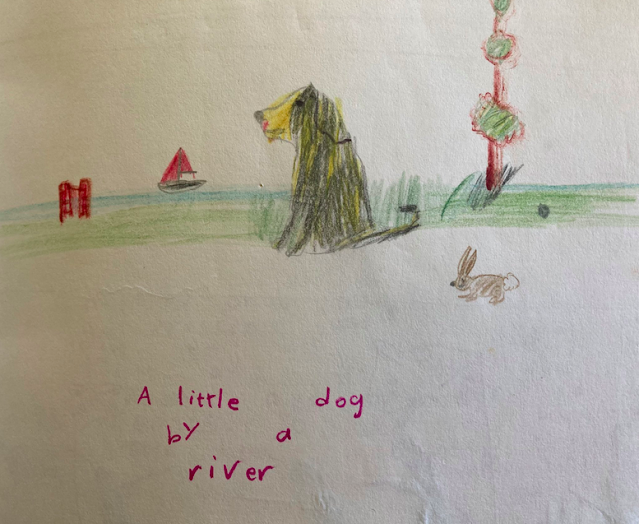