"I know they say 'God is an Englishman' - but I never thought He'd be quite this English..."

Last summer, in the gap between Lockdowns, Brian Mitchell and I finally sat down and wrote Lord God, a musical comedy we'd been talking about doing ever since we finished The Ministry of Biscuits, twenty years ago. And on June 10th this year it will have its premiere at Brighton Open Air Theatre, with a tour to follow as soon as things settle down a bit and venues become available again. 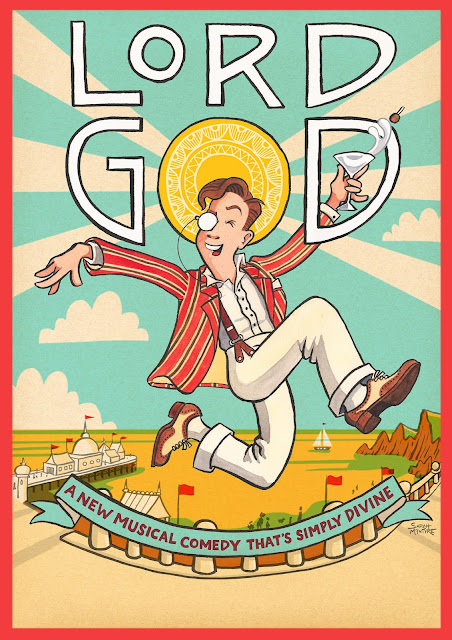 When the Lord God is persuaded by His retainer and chief-cook-and-bottle-washer Gabriel to take an incognito holiday to a Devonshire seaside hotel (largely to get Him out from under His angels’ feet), He looks forward to a fortnight of uninterrupted tennis, billiards, tea on the terrace and the latest Agatha Christie. But the presence of campaigning atheist Professor ‘Minty’ Tweddle and her fiance, notoriously hard-to-please theatre critic Rex Addison, upsets His plans and leads to all manner of supernatural scrapes, japes and narrow escapes – as well as the invention of a hot new global dance craze.

It all sounds terribly sacreligious, and I suppose it is, but we weren't setting out to offend - I think it works on about the same level as one of those cartoons of people arriving at the Pearly Gates, or standing around on a cloud with harps and halos, and is unlikely to shake anybody's faith. If anything, the atheists come off worse. But no one comes off particularly badly, because it's a generous and light-hearted sort of show. The overall tone we were aiming for is a sort of mildly supernatural Jeeves & Wooster.

Brian's score is, as always, magnificent: you can get a little flavour of it in this trailer, where we talk about where the idea came from (spoiler; from the BRAIN of BRIAN). And the cast will include Joanna Neary, Ian Shaw, Murray Simon, and Emma Cunliffe.

You can find tickets for the Brighton production here, and I'll post details of further dates and venues once they're confirmed.