It was always at sundown they were seen. In that twilight hour, when the walls between the worlds grew thin, strange things might slip through the cracks. Sometimes then, so the stories went, enchanted islands would appear in the empty ocean to the west of Wildsea… 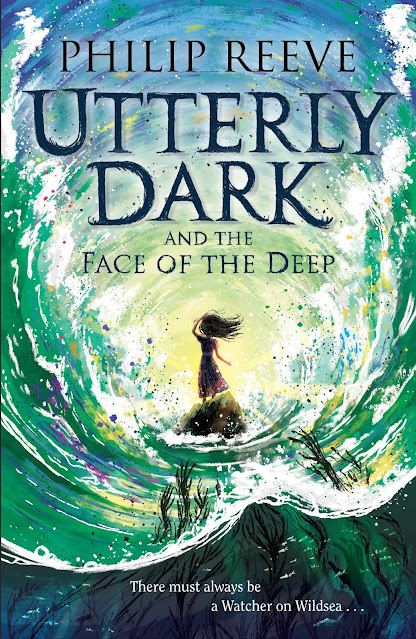 I have a new novel coming out in September! The cover (above) is by Paddy Donnelly (who is also working on some chapter-head vignettes), and it will be published by David Fickling Books.

Utterly Dark and the Face of the Deep takes place in the early 1800s on the remote island of Wildsea. For centuries, the Dark family have acted as Watchers, keeping a look-out for mysterious islands which are believed to appear from time to time on the western sea, and guarding Wildsea against a terrible monster which is said to live on them. When the current Watcher mysteriously drowns, his young ward Utterly takes over his duties. Gradually, she starts to discover her strange connection with the forces which dwell in the deep ocean.

It's my first novel since Station Zero back in 2019, my first book with David Fickling and the first time I've really written about magic except for comedy purposes. It's also the smallest made-up world I've ever written about – having had a whole galaxy to play in with the Railhead trilogy, it seemed like a nice idea to restrict myself to one small island.

So in some ways this feels like quite a change from my previous books. But it continues a lot of long-running obsessions, and it was edited by Liz Cross, who was my editor on Mortal Engines and Railhead, so I think it should appeal to fans of those too. I think I set out trying to write a gothic novel, until Utterly turned out to be much too sunny and cheerful a character to allow gloom and doom to prevail for long. But there are shipwrecks, witches, wandering weed monsters, and plenty of cakes. I think it's one of the best things I've done.

It was only a legend. At least, that’s what people thought in England, and on more civilised islands like Finnery and Lamontane. But this was Wildsea, on the wind-wracked western edge of the world, where trolls lived in the Dizzard woods and a real live Sea-witch still sang her spells down on the Undercliff. On Wildsea it was possible to believe in almost anything.

Tom White said…
This is very exciting! I cannot wait to read about Wildsea and will be preordering as soon as possible!
19 February 2021 at 11:33

Toad Hall Jones said…
From the East Coast of Canada and from an adult fan who has always loved each of your books for all these years even though my "read aloud to" audience is long gone and living under another roof - I am so happy for a new story! I will be pre-ordering from here too.
21 February 2021 at 23:51

philip reeve said…
Brilliant! Thanks so much. (I miss my read aloud audience, too...)

philip reeve said…
I'm sure that can be arranged - not sure how yet, whether I'll sign a bunch for bookshops, or you can just mail me a copy. More details nearer the time...
23 February 2021 at 11:40

Unknown said…
Thanks for sharing this post with us.Wikivela

Moni banu said…
This blog very is impressive; I am inspired how continuously you describe this topic. After reading your post, thanks for taking the time to discuss this,

Candy Gourlay said…
Shield painting addiction! So Sarah! If you need a grip or dogsbody, I'm available in the second half of August!
24 May 2022 at 12:10

Aristide Mboneye said…
My wife and I will forever remain grateful to Dr Amber for his divine intervention in our lives. We received the shock of a lifetime when we realized we've won a $3 million dollars house and $1 million dollars cash in the Australian lottery we played. All this was possible because of Dr Amber who gave us the right lottery winning numbers with his magical spell and he can help you too if really you believe in his work. To know more, visit: amberlottotemple.com or call/text +18084815132 or email: amberlottotemple@gmail.com
19 August 2022 at 10:46