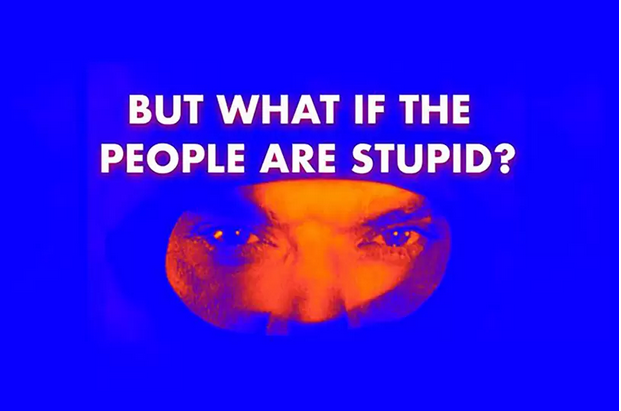 Adam Curtis is back (with a new six part series on iplayer, Can’t Get You Out Of My Head) and a lot of us seem to have had enough of his nonsense - all I’m seeing on my corner of social media is people disparaging him as pretentious, boring, or a charlatan. Pretentious he may be, and boring he can be (when his films were shown on TV rather than relegated to iplayer-only they definitely benefited from having to be squeezed into 30 or 50 minute time-slots). But a lot of my favourite artists are at least partly charlatans and none the worse for it, so I feel moved to spring to his defence.

I think a lot of people approach Curtis’s films as if they’re documentaries, and find their arguments tenuous and unconvincing. But while they use a documentary format, and Curtis’s sonorous voice sounds like that of a reliable BBC narrator, I think they’re really best appreciated as a sort of surrealist collage or William Burroughs-style cut-up fiction. Assembled entirely out of odds-and-ends of archive footage and scraps of old movies, they leap to and fro across the 20th Century, unearthing curious characters and interesting stories and then weaving a web of connections between them. The characters and stories are often fascinating - for instance, until I watched the first part of Can’t Get You Out Of My Head I knew nothing about rent-collector-turned-revolutionary-turned-murderous cult leader Michael de Freitas (here’s a good piece about him by the excellent Tomiwa Owolade). The connections often turn out to be non-sequiturs, or so contrived as to border on conspiracism, but I don’t think they’re intended to be taken entirely seriously. Curtis is operating like a novelist, appropriating bits of the real world and rearranging them in the service of his personal vision - specifically, a haunting and paranoid vision of the Twentieth Century.* His unsettling mix of the patrician and the avante-garde always reminds me of JG Ballard, and, like Ballard, his message seems to be that modern society is seething with barely suppressed primitive impulses which we do not fully understand, and cannot hope to control.

‘… which they did not fully understand, and could not hope to control’ is, of course, a classic Curtisism, almost as instantly recognisable as, ‘…but this was a fantasy.’ In any online discussion of the latest Curtis, someone will sooner or later post a link to The Loving Trap, a very accurate parody of his schtick by Ben Woodhams. The implication seems to be that Woodhams's spoof is some kind of killer riposte which, by exposing all Curtis’s verbal, visual, and intellectual tics, demolishes his films entirely. But this is a fantasy: it’s easy to parody Curtis, but it’s easy to parody any writer or artist who has a strong personal style - in fact, I think ease-of-parody could be probably considered one of the marks of a distinctive and original voice.

The other thing that makes Curtis a good target for parodists, of course, is that he basically keeps making the same film over and over again. I first stumbled across his work in the 90s, and it hasn’t changed a great deal in either style or subject matter. It might be nice to see him move on from his secret histories of the Twentieth Century and turn his attention more directly on some of the weird, atavistic figures who haunt the Twenty First, like Donald Trump, or Greta Thunberg…** But I guess that (again like Ballard) Curtis is being true to his own obsessions, and I’m happy enough to let his films wash over me. Like dreams, they can be very compelling while you’re immersed in them, and if when they end I’m left wondering what that was all about, at least they have thrown up some intriguing images, and made me think. Curtis is actually doing what Science Fiction ought to do but seldom does - entertaining us simply by banging ideas together and seeing what sparks fly off. Personally, I’m glad the BBC is still giving him a space in which to do his peculiar thing.

*EG: To claim a link between Cecil Sharp collecting English folk dances in the 1920s and the creation of ISIS in the 2010s is a bit of a reach for a documentary. But it's exactly the sort of thematic rhyme that works in art and fiction.

** To be fair, the final episode does encompass the fairly weird Dominic Cummings, Trump, Brexit, and the Pandemic.

Can't Get You Out Of My Head is currently in BBC iplayer: a lot of older Adam Curtis films can be found on YouTube. There is a good interview with him here.

November 01, 2020
Walter Tevis was an interesting writer, and an exceptionally good one. I don’t think he’s exactly a household name, but several of his books were turned into movies which are - The Hustler (and it’s sequel The Colour of Money ) and The Man Who Fell To Earth . As a teenage sci-fi afficionado I knew him for the latter, and for a handful of good SF stories. Which must be why, sometime in the eighties I picked up a copy of The Queen’s Gambit. I don’t recall much about it except that it was a real page-turner: a memory of the grotty living room of my student house where I sat up all night reading it came back to me powerfully when I saw that it’s been adapted as a Netflix series. Since The Hustler and The Colour of Money are about the lives of professional pool players there’s an obvious thematic connection to The Queen’s Gambit , which is about a world-class chess player. But it also has a lot in common with The Man Who Fell To Earth , another story about a not-quite-human genius laid l
Post a comment
Read more