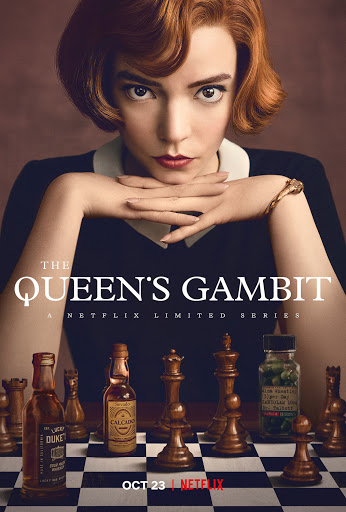 Walter Tevis was an interesting writer, and an exceptionally good one. I don’t think he’s exactly a household name, but several of his books were turned into movies which are - The Hustler (and it’s sequel The Colour of Money) and The Man Who Fell To Earth. As a teenage sci-fi afficionado I knew him for the latter, and for a handful of good SF stories. Which must be why, sometime in the eighties I picked up a copy of The Queen’s Gambit. I don’t recall much about it except that it was a real page-turner: a memory of the grotty living room of my student house where I sat up all night reading it came back to me powerfully when I saw that it’s been adapted as a Netflix series.

Since The Hustler and The Colour of Money are about the lives of professional pool players there’s an obvious thematic connection to The Queen’s Gambit, which is about a world-class chess player. But it also has a lot in common with The Man Who Fell To Earth, another story about a not-quite-human genius laid low by all-too-human weaknesses.

I’ve never much cared for the film of The Man Who Fell To Earth - the book is one of those fairly rare SF novels which is a good novel as well as being good SF: it tells its spare story quite traditionally, and is the more powerful for it. Nic Roeg’s adaptation chucks out a lot of the narrative, or buries it under art house tics. With the storyline obscured, our attention settles on the acting, and we can’t help but notice David Bowie really isn’t quite up to the job. He does look phenomenal though, and I suspect its no coincidence that the creators of The Queen’s Gambit have chosen to make their heroine another spindly androgyne with dead white skin and orange hair. Constructed mainly from eyes and cheekbones, Anya Taylor-Joy would make an infinitely better Bowie than her Emma co-star Johnny Flynn, who's currently embarrassing himself - and us - in the trailer for the egregious Stardust. I mean, look... 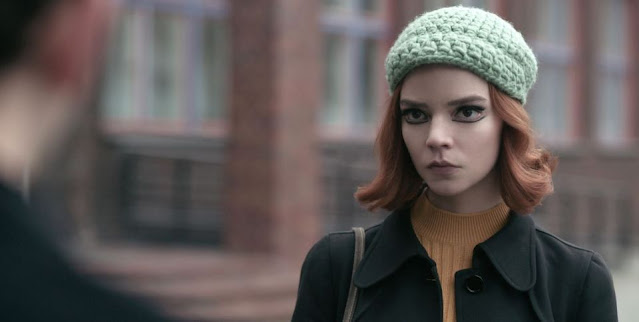 All of which is a very long preamble to sit through if you’ve come to this blog wondering if The Queen’s Gambit is any good, so I’ll get down to business: it is VERY GOOD INDEED. Directed by Scott Frank and created by Scott Allan, Scott Frank, and Allan Scott - who all sound like anagrams of each other - it’s one of those shows where every episode is like a perfect little movie. The first one alone is among the best things I’ve seen all year.

Most Netflix dramas have far too many episodes, most of which consist of a hook, a lot of padding, and a cliff-hanger to drag you into the next. This ‘limited series’ has only seven, and they aren’t structured like that at all. It’s quiet and strange and it unfolds at its own pace, but somehow manages to be completely compelling.

The first episode, after an introductory glimpse of the grown up Beth at a tournament in Paris, is entirely about her childhood. (Isla Johnson who plays the young Beth is so good that I was a bit sad at the start of episode two when she’s replaced by Anya Taylor-Joy. There’s also a tiny Beth who shows up in some flashbacks, Annabeth Kelly, and she’s great too.) She grows up in an orphanage after her mother’s death, and it’s there that she becomes hooked on a) the tranquilisers which 1950s orphanages apparently used to keep the orphans under control and b) chess, which is taught to her by the janitor Mr Shaibel. Played by Bill Camp (who was also impressive in Midnight Special), Shaibel is a taciturn old man whose initial disdain for Beth is replaced by a kind of awe as he realises he has a prodigy on his hands. But their relationship remains gruff and undemonstrative, as most of Beth’s relationships will be. Eventually she finds herself adopted by an unhappy couple who soon split up, leaving her in the flakey charge of Alma, (Marielle Heller, also brilliant) a frustrated pianist with a weakness for alcohol and upper respiratory tract infections. Home life is wobbly and high school is worse, but Beth just glides through it all; the mean girls’ bullying can’t really hurt her, because the only thing she cares about is chess. When Alma works out how good she is, and how much prize money can be made, they form a sort of team, traveling together to tournaments all over North America…

The art direction throughout all this is glorious. (Where are the budgets coming for high-end period dramas like this and Mrs Maisel? We should enjoy it while it lasts, I guess…) The Methuen Home for Girls is all subdued greens and greys, as if the colours of the tranquiliser pills are leeching into the walls. But if subdued greens and greys aren’t your bag, stay tuned, because once Beth gets out into the world she’s surrounded by vivid colour - the wallpaper! The frocks! Clad in a whole wardrobe of increasingly gorgeous dresses and coats, Anya Taylor-Joy looks like a marmalade cat who’s been transformed into a girl by some fashion-conscious witch. There’s a jazz-backed Scorsese-esque tracking shot through the lobby and up to the mezzanine of a Las Vegas hotel which seems to sum up all the excitement of the ‘60s, but almost as impressive is a simple slow pan across the sunlit campus of Ohio University (where Walter Tevis used to teach). There’s nothing showy about the shot of Beth arriving there for a chess tournament, but somehow it just feels right, as if we’ve been given a glimpse into the past. And then eventually there is Moscow, and a return to the subdued tones of the start at a final nail-biting tournament which the Soviets appear to be staging in a mausoleum

And just as I went through the novel in a single sitting back in 1985, we burned through all seven episodes in a week, and we never do that. What on earth makes the career and substance-abuse issues of an obsessive chess prodigy such compulsive viewing? It’s partly down just good storytelling, I think - the repeated chess matches don’t become boring because we understand the stakes and are rooting for Beth. There’s also a lot of variety in the way they’re filmed - sometimes near-silent, sometimes dramatically scored, sometimes as simple montages, sometimes skipping straight from opening move to aftermath, and on one occasion unfolding in multiple split-screen.) In sports-story tradition there’s a steady progression which pulls you through from early matches against high school chess clubs to higher and higher levels until a dreadful reversal before the final confrontation in Moscow with Borgov, the world champion.

But most of what makes it fascinating comes down to the character. This isn’t an ensemble piece like most TV series; it’s a one-woman show, and Beth is seldom off-screen for longer than a couple of shots. It’s rare to see a show about a woman like this. She’s not looking for love, she’s not interested in being popular, she’s not struggling to make her mark in a man’s world (or I guess she is, but I don’t think she sees it that way) and the only antagonist who threatens her is herself, via her own perverse appetite for self-destruction. She’s separated off from the world by the forcefield of her obsessions, from which infatuated chess nerds rebound like doomed sparrows colliding with a plate-glass window. She’s not conventionally likeable, but she’s somehow completely relatable, and kind of inspiring.

How closely all this follows Walter Tevis’s novel I can’t say - all I really remember about it is how much I enjoyed it. I have a sneaking sense that the TV version doesn’t quite stick the landing - there were a few too many things coming full circle in the final episode; a few too many old friends rallying round; a little too much emphasis on lessons being learned. But come the final sequence, Beth is herself again, ignoring convention and setting off to do her thing, dressed in a white wool number that Emma Peel would covet. Whether she’s won the tournament or not you’ll have watch the series to find out, but she’s certainly won a place in the pantheon of great TV characters. If, like me, you were starting to wonder if a Netflix subscription is really worth having, at least stick with it until you’ve watched this.