The Worlds of J.R.R.Tolkien

While I was working on my recent series of posts about The Lord of the Rings, the writer and Tolkien scholar John Garth kindly sent me a copy of his new book, The Worlds of J.R.R.Tolkien. Here’s my review.

When you’re a fan of a writer’s work, it’s natural to want to follow it to its sources, and find out what inspired it. The temptation is always to delve into their biography and connect key experiences to images in their books. I think one can go too far with that - when I was coming up with the various worlds on which the Railhead trilogy takes place, I sometimes drew on vivid memories of places I know well, sometimes took inspiration from nice photographs and concept art I saw online, and sometimes just made stuff up on the hoof to suit the demands of the story. Once it’s all been rewritten a few times, I don’t think the reader can tell the difference, and even I have often forgotten where a particular image came from. But there is no doubt that JRR Tolkien drew on some real-world influences for the landscapes of Middle-earth. He told us about some of them, identifying the Lauterbrunnen valley in Switzerland as the inspiration for Rivendell, and the shelled wastelands of the Western Front for parts of Mordor. But, as John Garth says in the introduction to The Worlds of J.R.R.Tolkien, ‘Existing discussions of Tolkien’s place inspirations are often unsatisfactory ... Tourist offices and entrepreneurs often ignore or distort the biographical facts to serve local commercial interests, and their assertions acquire the air of fact by being repeated in newspapers or on Wikipedia.’ He sets out to untangle the truth, and to put forward some plausible and well-evidenced theories of his own. 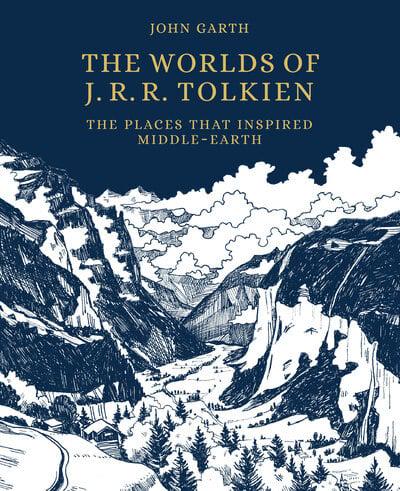 Divided into chapters based mostly around different types of landscape, the book explores how seas and shorelines, mountains, forests, the industrial midlands, and the battlefields of Flanders all fed Tolkien’s imagination and were woven into his slowly growing private mythology. It’s sceptical of some of the received wisdom (while accepting some aspects of the Birmingham - Mordor connection Garth points out that the Birmingham Tolkien knew as a young man, with its thriving toy and knick-knack industries, was also a good match for the town of Dale in The Hobbit. ) It also mentions some connections I had not heard before, suggesting the image of Luthien dancing in the woods, which is at the heart of one of Middle-earth’s most enduring myths, is a reference to a glade in Roos, Yorkshire, where Tolkien’s wife Edith danced during one of his spells of leave from the Great War. There is a good chapter on the war itself, which looms of much more of The Lord of the Rings than just the blighted wastelands of Mordor - on my recent re-read I saw its influence everywhere. Garth suggests that the glimpse of the Undying Lands at the end of The Return of the King - 'the grey rain-curtain turned all to silver glass and was rolled back, and he beheld white shores and beyond them a far green country under a swift sunrise' - might recall the coast of England seen from a ship bringing Tolkien back across the channel from the fighting, and that sounds plausible to me. Equally, of course, it could hark back to Tolkien's first sight of England when he travelled here from Africa as a small child. (Like Rosemary Sutcliff, another of my childhood favourites, Tolkien spent his early years abroad, and I wonder if one reason they both wrote so well about the British landscape is because they had seen it in their own childhoods with an outsider's eyes.) 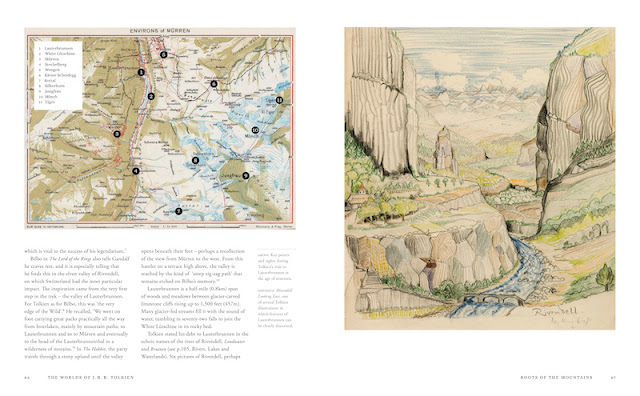 Beautifully produced and laid out, the book features a nice mix of landscape photographs, maps, period photos and illustrations, and Tolkien’s own paintings. There’s even an atmospheric Adam Burton image of Dartmoor’s Wistman’s Wood to open the Forests section (although Dartmoor, which has such a strong presence in Alan Lee’s Hobbit and Lord of the Rings illustrations, doesn’t seem to have been an influence on Tolkien at all.) It's beautifully produced, printed on a high-quality matt paper which serves the pictures well, and  it is ‘written to be read in order, but also to reward browsing’, with side-bars and panels expanding on the themes in each chapter.

Basically, if you love Tolkien’s work and want to know more about where it came from, this book is for you. And if you know anyone else who is, and does, their next birthday or Christmas present is sorted.